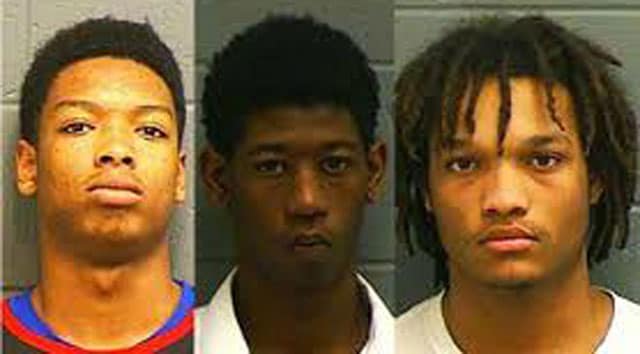 The three suspects were located thanks to the help of a K-9 unit. (Photo: Dekalb County Sheriff’s Office)

A Georgia teen was shot after he and two friends broke into an Ellenwood home Friday night, only to be met by a mother armed with a gun.

The break-in occurred around 10:30 p.m. as the homeowner and her two sons – ages eight and 10 – were sleeping. Police say three male suspects kicked in the door to the basement, causing such a commotion that it awakened one of the boys, who in turn woke up his mother to let her know he thought someone was breaking into the house. The woman, who DeKalb County’s Public Safety Director, Cedric Alexander, confirmed to local NBC affiliate is a detention officer with the Dekalb County Sheriff’s Office, then grabbed her gun and went to investigate.

The woman met at least one of the intruders walking up the basement stairs into the main living area of the home. She shot him, which sent all three fleeing immediately.

Furaha Merrit, who lives next door, told WSBTV she was awakened by the sound of gunfire.

“I just heard three shots, and they were loud like bang, bang, bang,” Merrit recalled.

Merrit then got up and looked out the window to see one of the suspects running down the road. Moments later, her mother yelled that there were two more males running through the back yard. Merritt then called 911.

When officers arrived on the scene, which Merrit said was only about two or three minutes after she called, they found a television and several video games in the backyard, which they believe were dropped by the suspects as they attempted to get away from the armed homeowner.

The suspects initially did get away, but thanks to the help of K-9 units, were later found. One of the suspects, who was suffering from a non-life threatening gunshot wound, was treated at a local hospital and released into police custody. All three suspects, who were later identified as Vashaun Gavins, 18, Khalil Cooper, 18, and Christopher Stone, 19, are now behind bars.

Authorities do not believe the woman’s home was specifically targeted, but Merrit said, “They just picked the wrong house.”