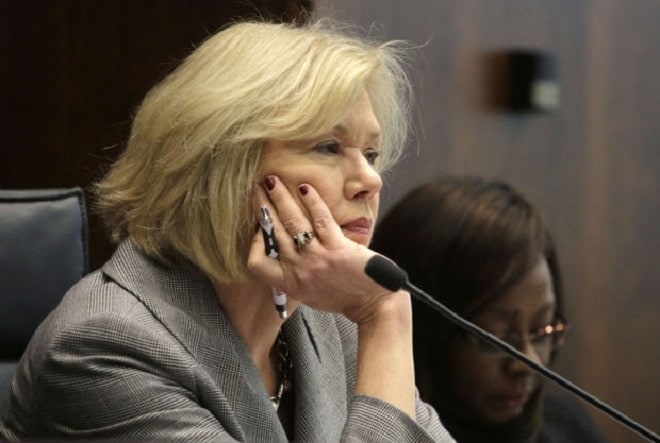 A trio of bills in the Illinois Senate could lead to more denials of Firearm Owners Identification Cards as well as mandate police remove firearms from those without one.

Introduced last month, the proposals would compare FOID card applicants against terror watch lists, revoke cards of those later diagnosed with mental disability or a finding that a person has been involuntarily admitted, and direct police to pursue the seizure of guns from those who have lost their cards.

“Recent events across the country have brought to light loopholes that allow individuals access to firearms who absolutely should not have them,” said Sen. Julie Morrison, D-Deerfield, the author of the trio of bills. “We must ensure these loopholes are closed.”

Morrison currently has three measures that are under review in the Assembly.

SB2211 would authorize the State Police to follow up with local law enforcement on individuals who have had their FOID card revoked within five days, directing them to seek a search and seizure warrant for the individual’s residence for firearms. Under current law, police may voluntarily seek such a warrant while Morrison’s bill would make it mandatory.

SB2212 would direct the State Police to compare the FOID card database, both of existing gun owners and future applicants, against the consolidated Terrorist Watchlist maintained by the Federal Bureau of Investigation. Those found on the list would be denied and any card already issued would be revoked.

SB2213 would force circuit court clerks across Illinois to forward names to the State Police every six months of those adjudicated by the court to have a mental disability or be involuntarily admitted. Clerks that omit sending the data will be subject to a misdemeanor crime.

Gun control advocates see the package as extending the firearms regulations common in Chicago to the rest of the state. Indeed, in 2013 Cook County Sheriff Tom Dart established small teams of deputies to go door-to-door rounding up firearms, ammunition and FOID cards from convicts and individuals adjudicated mentally defective.

“I think people become complacent in more rural parts of any state,” Vickie Smith, CEO of the Illinois Coalition Against Domestic Violence, said. “People may tend to think (gun laws) are not a big deal, but it’s not where you live that contributes to violence.”

All three bills have been referred to the Senate Judiciary Committee.

In addition to her FOID legislation, Morrison has reintroduced a measure she backed last session to repeal part of Illinois preemption law and allow cities and towns to regulate the possession or ownership of certain firearms based on cosmetic traits. This came on the heels of a victory in federal court of the Chicago suburb of Highland Park in a challenge over the city’s assault weapon law. Highland Park was able to establish their ordinance, an outright ban on so-called “military-style assault weapons” and high-capacity magazines in 2013 during a brief window while the state was revamping laws to comply with federal court orders for concealed carry.