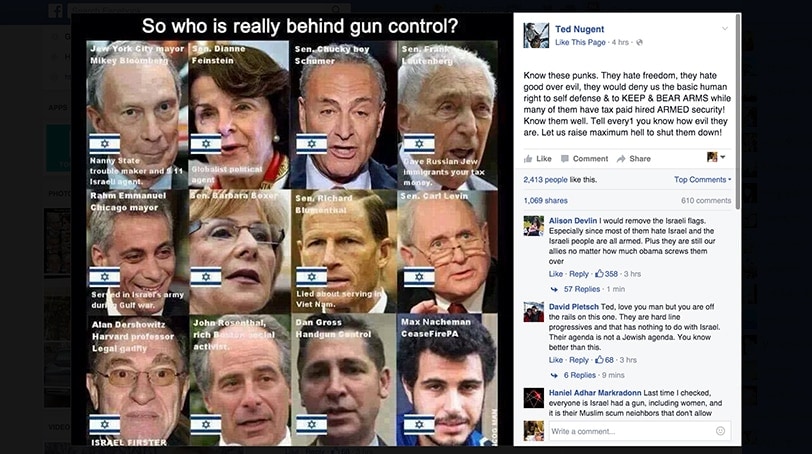 “So who is really behind gun control?” (Image: Ted Nugent/Facebook)

The Anti-Defamation League on Monday called on musician and gun rights advocate Ted Nugent to remove a photo compilation posted to his Facebook page showing the faces of prominent Jews who support gun control.

Titled “So who is really behind gun control?” the image shows the 12 politicians and activists each with a small Israeli flag and their names superimposed.

Some of the familiar faces have not so familiar captions accompanying them. Bloomberg’s image claims he’s a “Nanny State trouble maker and 9/11 Israeli agent.”

“Know these punks,” Nugent’s Facebook post read. “They hate freedom, they hate good over evil, they would deny us the basic human right to self defense & to KEEP & BEAR ARMS while many of them have tax paid hired ARMED security! Know them well. Tell every1 you know how evil they are. Let us raise maximum hell to shut them down!”

Nugent didn’t create the image, which has been featured on anti-Semitic websites in the past, the ADL noted.

“Ted Nugent has a long history of being an equal opportunity offender. But his latest share on Facebook, making the outrageous suggestion that Jews are behind gun control, is nothing short of conspiratorial anti-Semitism. Regardless of one’s views on gun control, this kind of scapegoating of an entire religious group is completely unacceptable and completely divorced from reality,” said ADL CEO Jonathan A. Greenblatt.

Nugent, a board member of the National Rifle Association, came under fire in January 2014 for similar mischaracterizations when he compared film producer Harvey Weinstein to Nazi Germany’s minister of propaganda, Joseph Goebbels.

Nugent’s Monday image in just a few hours after being posted garnered some 2,342 likes, 1,030 shares and 574 comments, many chiding him for posting the image linking Jews to the gun control debate.