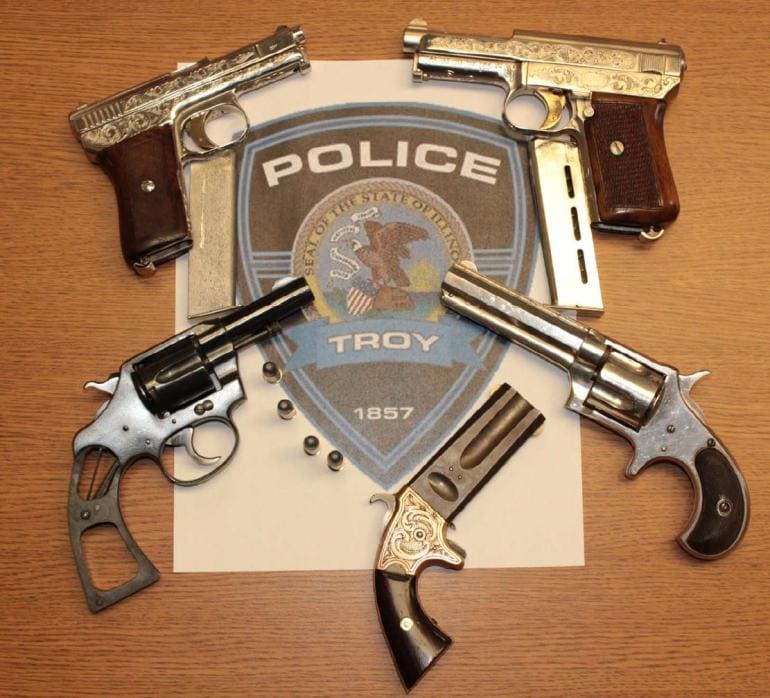 Not your typical stolen Jimenz and Rohm gatts…(Photo: Troy Police Department via Fox2)

Police in Illinois have arrested two 18-year-olds along with a quartet of juvenile offenders following the theft of $10,000 worth of collectible firearms.

Among those charged are Kameron Garcia and Cole Young, both 18, of Collinsville who are being held at the Madison County Jail on a $100,000 bond. The underage youths are being held at a juvenile detention center.

Police were turned on to the theft after a juvenile was found with one of the handguns at Collinsville High School on January 7. The next day, a Troy resident called authorities to report the possible theft of six vintage firearms during a party held at the residence earlier in the month.

The subsequent investigation led to the arrest of suspects with pending felony charges including aggravated possession of firearms and unlawful delivery of stolen firearms.

In a photo released by the Troy Police Department, the recovered guns include what appear to be two ornately engraved Mauser 1910/14/34 commercial pistols, a Colt Police Positive sans grips, what is likely an engraved American Arms Company double barrel swivel breech derringer from the 19th Century, and an antique wheel gun from the same era.