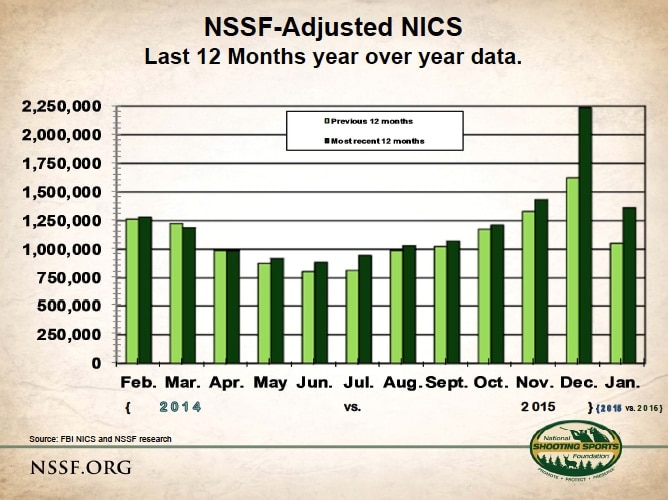 NSSF adjusted NICS for the past 12 months. (Photo: NSSF)

The biggest January for background checks dropped by more than a million after it was adjusted to primarily reflect sales.

The National Shooting Sports Foundation has released an adjusted version of the National Instant Criminal Background Check System’s numbers for gun purchases in January. While NICS reported around 2.5 million background checks for the month of January, the NSSF-adjusted number is closer to 1.4 million.

The NSSF finds the adjusted number by removing the background checks that were coded for concealed carry weapons permits and checks from active CCW permit databases. 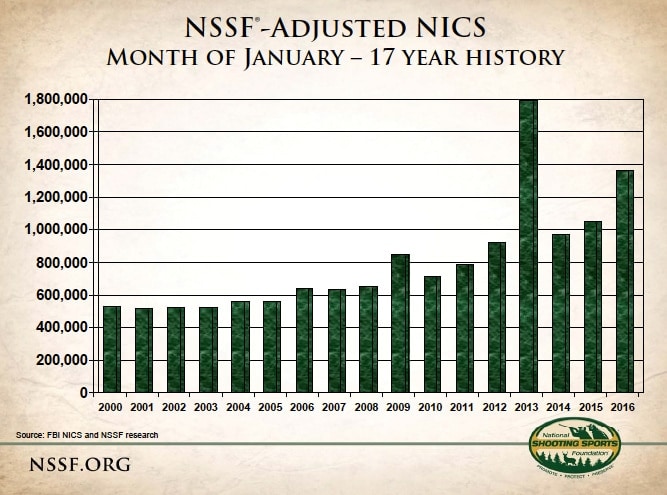 NSSF adjusted NICS numbers for the month of January over the years. (Photo: NSSF)

While the official numbers show 44 percent more background check applications in January 2016 than in 2015, the NSSF-adjusted numbers show a 29.5 percent increase over last year.

“Though not a direct correlation to firearms sales, the NSSF-adjusted NICS data provide an additional picture of current market conditions,” the gun lobby said.

While one of the purposes of NICS is to monitor the sale and transfer of new and used handguns and long guns, the official NICS figures, as well as the NSSF-adjusted ones, don’t “account for firearm sales using approved alternate permits such as a concealed carry license,” which several states allow for, the release said.

“Based on varying state laws, local market conditions and purchase scenarios, a one-to-one correlation cannot be made between a firearm background check and a firearm sale,” the NSSF release said.

It should also be noted that media reports from around the nation indicate concealed carry permit courses are increasing in popularity.