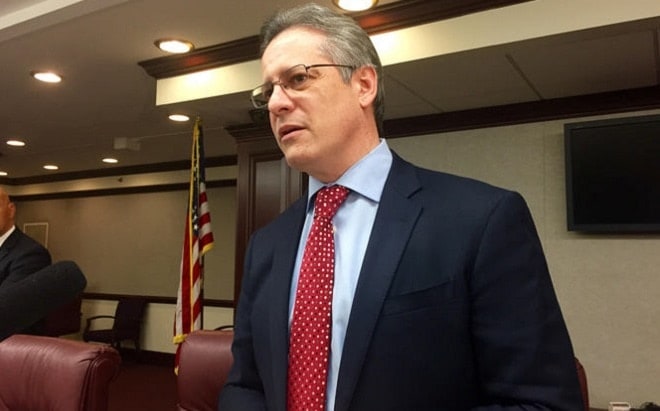 Florida State Sen. Miguel Diaz de la Portilla, R-Miami, is blocking a hearing on a campus carry measure over the cries of advocates and a rape survivor who contend he will not meet with them. (Photo: Kristen M. Clark/Tampa Bay Times-Herald)

A group of students seeking the right to have their concealed handgun permits honored on Florida’s public university campuses is taking on lawmakers opposed to the measure.

While a campus carry bill has already passed the state House with a smattering of Democrats on board last week, the companion Senate proposal, which has picked up a pair of committee endorsements already, is sidelined by the efforts of a powerful Miami Republican Sen. Miguel Diaz de la Portilla, R-Miami, who is refusing to schedule a hearing on the bill with his must-pass Judiciary Committee.

This has a student group seeking the concealed carry reform crying foul.

“Senator Diaz de la Portilla has taken it upon himself to unilaterally decide the future of a bipartisan bill that the vast majority of legislative members support,” reads an open letter to lawmakers from Bekah Hargrove, state director for Florida Students for Concealed Carry. “He has made a mockery of the American legislative branch and turned Florida’s legislative process into a one-man show, without respect for the safety of college students.”

The group argues the lawmaker, if he is opposed to the legislation, should allow it to be heard by the panel where he could always log a “no” vote against it. Instead, they contend he is ignoring his duty and short-cutting the legislative process.

“If this type of behavior is permitted to continue, the legislative system will be fundamentally changed forever,” says the group.

The letter from the student group comes just days after rape survivor Shayna Lopez-Rivas, an undergraduate at Florida State University who was raped on campus, shared her extensive correspondence publicly with de la Portilla’s office in which the Senator refused to meet with her to discuss campus carry. She followed this up with an open letter published by The Hill on Monday.

“I won’t deny the possibility of getting injured, but my gun gives me a chance that pepper spray, stun guns, and pocketknives never will. It prevents a knife being held at my throat and the voice of a stranger promising me he won’t kill me,” wrote Lopez-Rivas.

The intransigence of de la Portilla is compounded, contends Hargrove, by his support from Senate President Andy Gardiner, R-Orlando, who has promised he would not bring the measure out of committee over the chairman’s head.

She warned of political fallout for both senators.

“Senate President Andy Gardiner can easily allow campus carry to go through a different committee, but he knows Senator Diaz de la Portilla will block the bill and has decided to use that to his advantage in order to claim he supports gun rights without having to take action,” Hargrove told Guns.com on Monday. “Both he and Senator Portilla are RINOs. Senator Diaz de la Portilla in particular should be expelled from office. I see no reason that legal action should not be taken against him.”

However, it may not just be campus carry under the gun in the chamber, as de la Portilla told reporters Monday that an open carry bill, which similarly passed the House and needs his committee’s blessing in the Senate, in turn may not be heard at all.

“I have some serious concerns about open carry in light of what happened in the House last week,” said Diaz, voicing fears the bill may, “become a vehicle for some very, very bad amendments,” should it move forward.