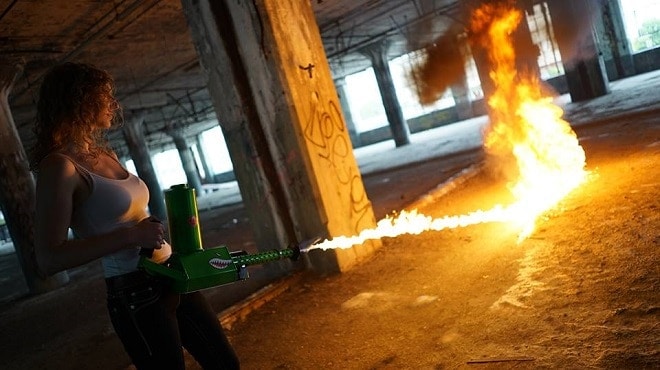 The $1,200 XM42 will send flame over 25 feet away and last for about 38 seconds, but has earned frowns from lawmakers seeking to regulate it over what “could” happen. (Photo: Ion Productions)

In the absence of documented flamethrower attacks, Guns.com spoke with the head of a company that makes the devices about pending legislation that seeks to regulate the items.

Detroit-based Ion Productions has been working on the XM42 flamethrower concept since 2008 and last year raised $50,000 overnight through crowdsourcing to move what they billed as the “world’s first commercial handheld flamethrower” forward into production.

Moreover, they did their homework beforehand. “During the development and funding of the XM42 project, we were in contact with numerous fire departments and controlled burn workers in regards to its utility for them,” Chris Byars, Ion’s president and founder told Guns.com. “Farmers, firefighters, controlled burn prescribers have used devices that emit streams of fire for many years.”

Further, Byars argues, the technology is already out there with countless YouTube videos on making your own with rudimentary items, and moved it into a commercial arena.

“What we’ve done is make a compact, portable unit engineered with safety in mind, manufactured with precision and proper components to produce a stable and reliable product,” he explained. “You can make a makeshift flamethrower out of an aerosol-can and lighter, or a water gun and a torch. Both of these have inherent risks not present in our purpose-built unit comprised of industrial grade components. The XM42 is designed to sustain heat and multiple fuels, and is built to last with safety in mind.”

Laws governing the devices are few, with only California and Maryland having codified their use while the Bureau of Alcohol, Tobacco, Firearms and Explosives have no mandate to restrict them. However, just months after the X42 gained national media attention, lawmakers sought to step up regulation.

Last August, city officials in Michigan’s third-largest city, Warren, proposed an ordinance prohibiting the storage, use and possession of flamethrowers inside the city limits. Those found guilty of possessing or using such a flame weapon would be liable for a $500 fine and up to 90 days in jail.

Warren Mayor Jim Fouts, a Republican, said the new law is needed to avoid future problems but could not cite specific incidents in which flame devices were to blame for chaos.

“You know something like this will be used by bad people for bad things,” said Fouts at the time.

Similar efforts soon popped up on the radar in Troy, Michigan as well as in the state legislature though the statewide ban gained little traction.

Then last month the move to prohibit flamethrowers went to Capitol Hill when U.S. Rep. Eliot Engel, D-NY, in an ode to a Seth Meyers sketch on Saturday Night Live introduced the “Flamethrowers? Really? Act.”

Like Fouts, Engel explained the need simply as, “because you’d just assume—right?—that flamethrowers would be regulated.”

Byars takes exception to the concept that regulation is needed, as the X42 and other devices are nothing more that tools and, to some, curios, even appearing in use on numerous online gun channels.

“Our flamethrower was developed with aesthetic appeal for everyone to enjoy as a novelty device, but with practical use for those that need it,” he said.

As for lawmakers seeking to expand restrictions, Byars feels that the government should not infringe on others because of fear of what “could” happen if someone misuses one of these devices though he advises for safety sake no one should be using an XM42 in close proximity to dwellings or inadvertently ignited objects.

And as with any product, if you’re afraid of it, just don’t buy it. “Simply owning a particular product should not be a punishable offense,” he said. “Punish the person if they misuse it, like any other thing out there.”

Byars advised he has sold several XM42s to customers who are thrilled with them for both on the job and personal use.

“Everyone loves these,” he said. “Well, almost everyone, apparently.”