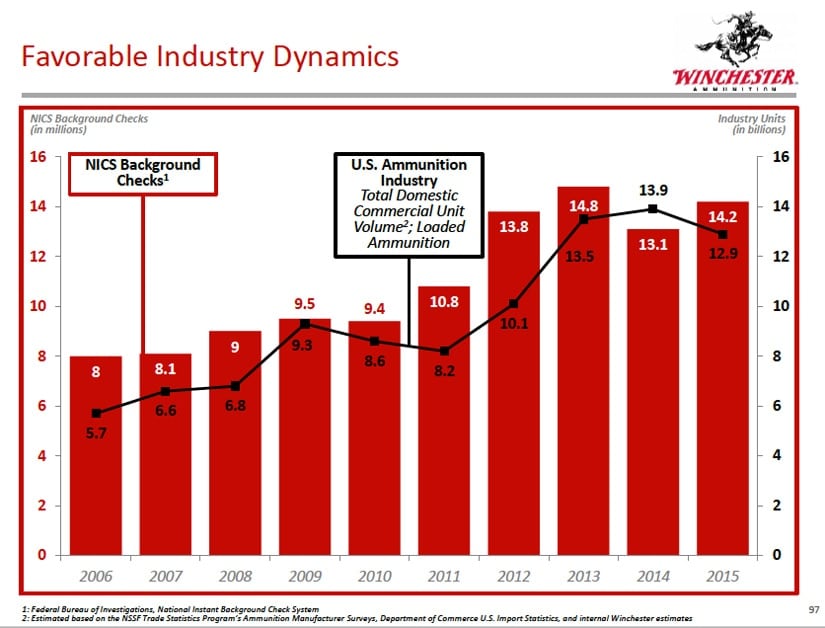 A graphic showing ammo sales alongside NICS checks for the past decade.

The management of Winchester Ammunition at a New York investors’ conference Tuesday described the company as a “stable and predictable” source of income, re-emphasizing stability amid years of surging sales.

Winchester is a division of chemical giant Olin Corporation and generates 12 percent of the corporation’s $2.9 billion annual revenue.

Thomas O’Keefe, president of Winchester, said during the presentation the success is due in part by maintaining diverse, market-driven products.

“One of the main strengths of Winchester, besides our great brand, is the fact that we deliver to all trade channels,” he said, adding that the ammo maker is the leading supplier for most big box retailers and number two for the rest.

O’Keefe pointed to the growing number of background checks performed by the National Instant Criminal Background Check System as an indicator not just for gun sales but also ammo sales.

“To no surprise with that increase in the firearm purchases, sales of commercial ammunition has also increased,” he said, showing a graphic where ammo sales in the billions coincides with check in the millions. The chart shows ammo sales growing from 8.2 billion in 2011 to 13.9 billion when it peaked in 2014 and 14.2 billion in 2015.

As for stability, O’Keefe flashed demographics showing 50 percent growth in target shooters, an increase of 17 million, with more than two-thirds between ages 18 and 34 years old.

“Where commercial is our major emphasis, we also have a very meaningful presence in the U.S. military as well as law enforcement,” he said.

From 2014 to 2016, Winchester landed five 5-year contracts with military and federal law enforcement agencies, as well as supplying to major police departments in cities like Los Angeles, Chicago and Atlanta. Most recently as last week, Winchester won a contract with the U.S. Army valued at $99.2 million.