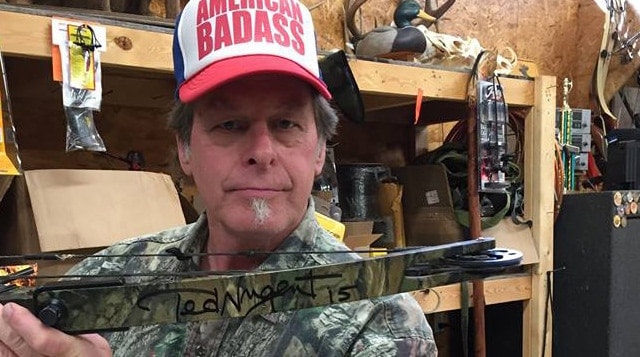 After doubling down on anti-Semitic remarks, rocker Ted Nugent attacked his critics, which included gun groups, and called the condemnation a result of a PC world.

“How tragic that the self inflicted scourge of political correctness can blind so many otherwise intelligent people!” he said in a Facebook post Wednesday.

The National Rifle Association board member said he had received praise from the late Aaron Zelman, founder of Jews for the Preservation of Firearms Ownership, and included his statement he issued when Zelman died in 2010.

“If Aaron and I were together in Nuremberg Germany (sic) in 1938, I am confident that we would have led the charge to disarm Nazis and kill them with their own Lugers, refusing to board the trains or be told what to do,” Nugent wrote. He then described JPFO’s response as “sad bullshit.”

In a statement, the group condemned Nugent for sharing and commenting on a meme identifying gun control as a Jewish conspiracy.

“The deeply anti-Semitic comments and prominent positioning of the Israeli flag imagery as a tool of anti-Semitic identification combine to leave us deeply disturbed,” the JPFO said.

“While Nugent has long been known for outrageous and offensive statements, these latest comments place Nugent clearly over the line,” the group added.

Following the initial backlash, Nugent shared another meme of a group of people identified as Jews in Nazi Germany that reads, “How did Hitler get millions of people to follow along blindly and not fight back?” along with the his own comment, “Soulless sheep to slaughter. Not me.”

Outspoken pro-gun websites Bearing Arms and The Truth About Guns criticized Nugent for his comments.

Owner of TTAG, Robert Farago, said Nugent’s statements push the pro-gun agenda into “full-on religious hatred” and described himself and members of his staff as Jews.

“I do think he owes the world a sincere apology,” said Bob Owens, owner of Bearing Arms, in a post on the matter, but added he didn’t think Nugent’s NRA status should be revoked.

“Nugent should be ashamed for promoting anti-Semitic content, and we hope that good people on both sides of the gun control debate will reject his tactics and his message,” said Jonathan Greenblatt, ADL’s chief executive officer.

Nugent found himself in a similar situation at the beginning of 2014 after an interview with Guns.com in which he called President Obama a “subhuman mongrel.” As a backlash ensued and resulted in concert cancellations and public outcry, he apologized. However, in later an interview one year later he called the statement “precious.”