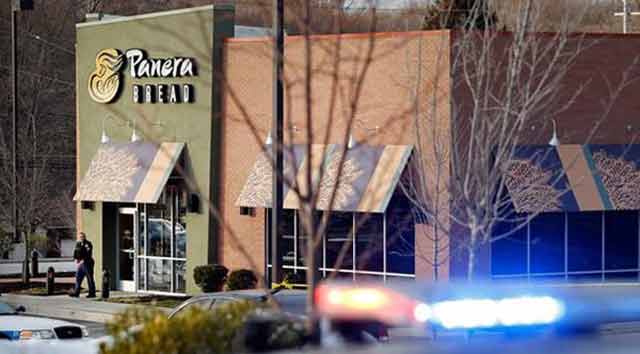 Once shots rang out, some patrons at the Panera Bread restaurant ran to a brewing company next door to seek safety. (Photo: ABC)

The start of a conversation with what appeared to be a homeless man in a Panera Bread restaurant in Abingdon, Maryland, ended with two Harford County Sheriff’s deputies, as well as the suspect being shot and killed Wednesday afternoon.

A local ABC affiliate reported that officers were called to the restaurant just before noon, but did not indicate the exact nature of the call. When the responding deputy arrived at the business, he walked over and sat down with a man who witnesses described as appearing to be homeless. According to Harford County Sheriff Jeffrey Gahler, officers were familiar with the man, but it’s unknown if they encountered problems with him in the past.

After sitting down, the deputy asked the man how he was doing. At that point, the man pulled out a handgun and shot the deputy in the head. Fifteen-year-old Sophia Faulkner was having lunch with her mother and witnessed the entire incident unfold.

“I saw him (the deputy) fall back out of his chair, and the blood started coming out,” Faulkner recalled. “I didn’t know how to process it. My mom said, ‘What’s going on?’ and I said, ‘Get down. Someone just got shot.’”

Once shots were fired, patrons began to panic and chaos set in. Faulkner said everyone in the restaurant started screaming and running around, trying to take cover, but the gunman fled from the scene.

Authorities caught up with the suspect a short distance from the restaurant and a shootout ensued. Another deputy was shot and killed during the exchange, as was the suspect, who was later identified as 67-year-old David Brian Evans. No one else was injured in the exchange and police recovered Evans’ gun at the scene. 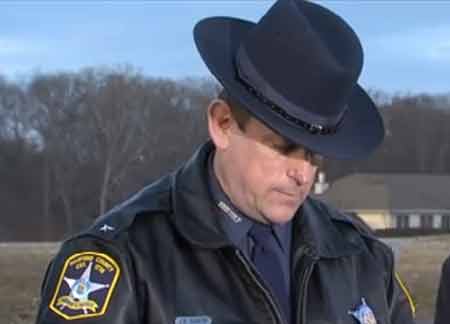 Trying to hold back tears, Harford County Sheriff Jeffrey Gahler confirmed the death of two of his deputies on the day which he called “tragic.” (Photo: ABC)

The names of the fallen deputies have not been made public at this time. Gahler said although the immediate families have been notified, there are other family members in need of notification before the names are released. The deputies, described as outstanding officers who served their communities faithfully, were 30-year and 16-year veterans of the force. Gahler asked for respect for the families as they mourn.

Although authorities do not have a clear motive at this point, Gahler confirmed that, at the time of the shooting, Evans had active warrants out of Harford County and Orange County, Florida, where he was previously accused of assaulting a police officer.

Faulkner’s mother, Lynn, is a registered nurse and said she’s seen Evans around town – at the same restaurant, the library and other places.

“He’s definitely in need of mental health care, and he never should have had a gun,” she said, adding that Evans knew what he was doing because he aimed right for the deputy’s head.