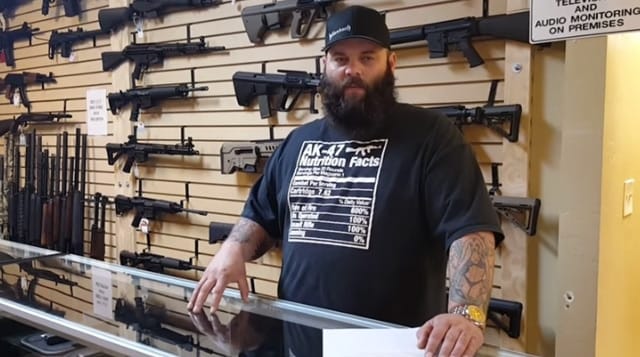 Chris Cook, owner of The Armory, discussing the agreement in the civil case with the Justice Department.

A Bakersfield gun store owner is defending himself in the court of public opinion after forfeiting thousands of AR lower receivers to federal regulators.

Cook, who has a license to sell guns but not one to manufacture, sold the items at his store and online, and distributed them to other dealers at gun shows, according to a statement from the Justice Department on Tuesday.

Cook was the subject of an ATF investigation in January 2014 in which undercover agents bought 33 lower receivers from Cook’s store, online business and from one of his distributors. None of the lower receivers were serialized and neither Cook nor his distributor performed a background check before facilitating the sale.

However, in an interview, Cook called the issue a clerical error and said his former lawyer gave the ATF the wrong information, which led to a raid in April 2014.

“(ATF) were under the impression that what we were trying to do was actually manufacture a firearm or an unlicensed, unserialized firearm and then revert it back to what would be considered an 80 percent blank,” he said.

The ATF described the items as containing cavities with different color polymer, making it easier to mill out the cavities and convert the lower into an operational firearm. Targeting the illegal manufacturing and distribution of unfinished lower receivers is a priority for the ATF, especially in California where state gun laws tend to be stricter than federal law.

According to the judgment, Cook agreed to forfeit 3,804 lower receivers but did not have to admit to wrongdoing. Additionally, his store, EP Armory, is still in business.