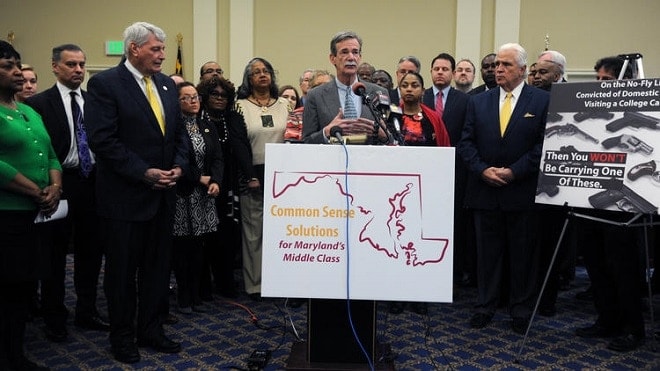 Debuted Wednesday with the backing of state Senate President Thomas V. “Mike” Miller, Jr. and House Speaker Michael Busch, the bills would ban guns on public college and university campuses; direct the Maryland State Police to prevent those on the FBI’s terror watch list from purchasing a firearm; and require those with domestic violence convictions to turn over their guns.

“We are taking common sense steps to make our communities safer because guns don’t belong on college campuses or in the hands of convicted abusers and suspected terrorists.” Busch said in a statement.

First on the list for the Democrat Caucus is a proposal to strike the allowance currently given to public colleges and universities in the state to set their own policy on gun free zones. Instead, it would be replaced by a universal ban on the legal carry of firearms with exceptions for security and law enforcement personnel inside the scope of their jobs.

Next, a separate measure would turn the FBI’s no-fly-list into a Maryland no-buy-list by setting a mandate for the State Police refuse firearms permits to those found on the list seeking to purchase a one. Since 2013, the state has required a Handgun Qualification License (HQL) permit to purchase pistols and revolvers.

Similar efforts are afoot in Connecticut, Illinois and New York, though they have the prospect of legal challenges on constitutional grounds.

Finally, another bill would require judges in the state to order individuals convicted of a domestic crime to hand over their firearms to police or a federally licensed firearms dealer within 48 hours. Although federal and state law already consider domestic violence convictions to be a disqualifier for firearms possession, the new law would set in place a two day window to relinquish ownership.

This comes as panel for the Fourth U.S. Circuit Court of Appeals in a 2-1 ruling last week found Maryland’s 2013 gun control laws to a degree, “substantially burden the core Second Amendment right to defend oneself and one’s family in the home…” and ordered a lower court to review legality of the mandate with strict scrutiny.

“Not one of these laws would address the real issues facing Maryland or improve public safety,” National Rifle Association spokesperson Amy Hunter said. “Instead of addressing real problems, they are trying to push a political agenda by proposing laws that are redundant, impede law-abiding citizens from exercising their constitutional rights and would do nothing to improve public safety.”

The legislation, to be filed this week, would join the nearly 50 bills concerning weapons already slated for this session.