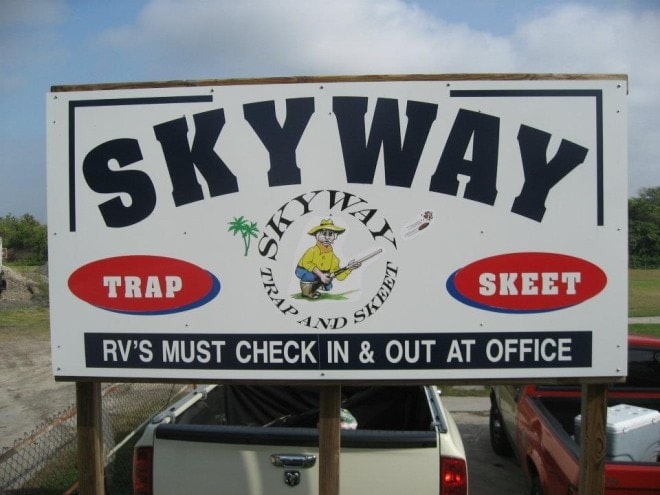 Gun rights advocates and a regional water agency are squaring off in Florida over a badly constructed berm and a long-standing conflict. (Photo: Skyway Trap and Skeet Club)

Founded in 1945, the Skyway Trap and Skeet Club in St. Petersburg features both Olympic and American style clays and have hosted Florida’s Sunshine State Games in addition to housing an Olympic Development Program. On their website, Skyway boasts of being “one of the few ‘green’ gun clubs in the Nation who utilize steel shot instead of lead.”

Part of the reason the club uses steel shot is due to the Southwest Florida Water Management District, known as Swiftmud to locals after its abbreviation. The District came along more than 15 years after Skyway’s founding and in 1975 used an eminent domain action to acquire land owned by the shooting club, but allowed an easement into the land for falling shot.

As part of a mitigated court settlement in 2004 with Skyway brought about by the state Department of Environmental Protection seeking to end the long-granted easement, the state paid to remove accumulated lead shot from the grounds and the club switched to eco-friendly steel shot, which has no effect on groundwater.

Following that, Swiftmud was required to build a berm between the club and their properties to contain even that newer grade of expended ammunition.

With the issue settled at the time, state lawmakers adopted regulations that protected shooting ranges in the state from further litigation, citing they are a necessary component of the guarantees of the Second Amendment.

However, now the water district and gun club are lawyering up once more over the berm constructed by the district. Last year Swiftmud brought Skyway back into court with the water district seeking a judge to order construction of a shot barrier atop the existing berm, paid for by the club.

Until then, the water district wants the shooting to stop. This has the state’s powerful gun rights champion, Marion Hammer, executive director of the Unified Sportsmen of Florida and a former National Rifle Association president, going on a counter offensive citing the district is violating the law set up to insulate ranges from such harassment.

“Today we are calling upon Governor Rick Scott, Attorney General Pam Bondi and the Florida Legislature to take immediate action to once and for all abolish the Southwest Florida Water Management District,” said Hammer in a statement emailed to Guns.com. “SWFWMD is a malignant state agency that uses unlimited tax dollars in what I can only call an evil attempt to steal private property and destroy a small private business.”

Hammer told Guns.com that Swiftmud is trying to confuse the issue by contending it is about lead contamination, though the lead has been cleared up for a decade. The real problem is that Swiftmud’s court-ordered berm is not only inadequate but is starting to degrade with sinkholes and tunneling from rainwater absorption and runoff, creating an unsafe and unstable earthwork. Indeed, a contractor for the district was killed in an accident while working on the berm in 2014.

Now the district is looking to pass its bad engineering problem onto Skyway to fix, a solution the club can’t afford.

“The berm is totally incompetent for any purpose, and it was a waste of taxpayer dollars – but even if it were stable, a ‘shot barrier’ would not do the job of keeping shot contained, thus giving SWFWMD an excuse to harass Skyway further,” Hammer said.

As for Swiftmud, a representative for the district told the Tampa Bay Times the problem is with the gun club.

“The district has attempted to engage Skyway in a dispute resolution process provided by the settlement agreement and remains hopeful that Skyway will proceed in good faith to honor its obligations under the agreement,” said Swiftmud spokeswoman Susanna Martinez Tarokh.