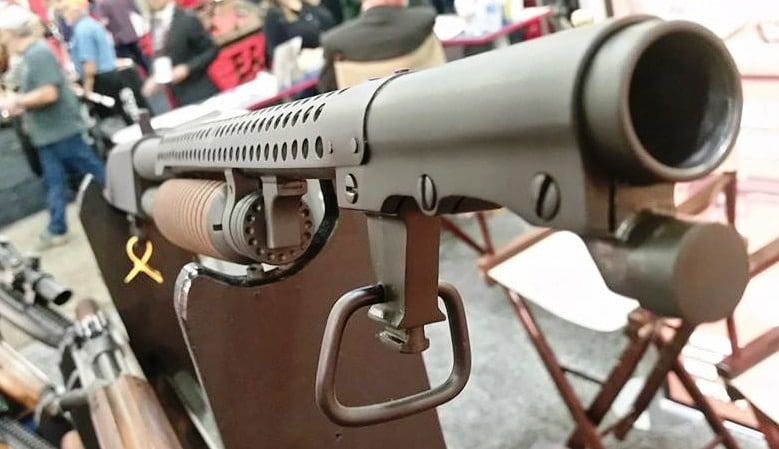 The business end of the Model 37, also known as the “trench gun” or “riot gun.” (Photo: Inland/Facebook).

The 12-gauge “trench gun” is back after a 41-year hiatus. Inland Manufacturing, in partnership with Ithaca Firearms, announced this week a re-production of the Model 37 combat shotgun.

The new production models are faithful to the original design from its bead sight, Parkerized finish, oiled walnut stock, and ventilated hand guard to its hard-to-miss bayonet lug that fits the long 1917 bayonet, said Charles Brown, president of MKS Supply, the firm marketing the historic firearms. He called the gun an “authentic combat firearm once used by our troops in Vietnam.”

The Ithaca Model 37 made its original debut in 1937, based on a design by the legendary John Browning. Production of the Model 37 stopped in 1945 because at the time post-war “riot guns” were in sufficient supply to satisfy the law enforcement and civilian markets stateside.

But war in Vietnam brought demand back, and the Model 37 earned a respected place as a tool for combat medics and other support personnel as well as many Special Forces troops of the day. Production was once again halted in 1975.

Field testing during the Vietnam era revealed the versatility of the Model 37 — not only was it a close-range fight-stopper, but proved its carbine-like capability to do big damage out to 75 yards when loaded with 00, 000, and #4 buckshot, slugs, and, infrequently, even flachette rounds.

The Model 37 has a capacity of 4+1. Overall length is 38.5 inches, of which 20 is barrel. It weighs 6.7 pounds. The receiver is machined from a single slab of steel and bears the same military stamps as the original. Loading and ejection are just like the original too, via the belly of the receiver.

Out of the box, the gun comes with a military-style sling, though it’s not been revealed if the sling will be cotton webbing or leather. The gun will retail for $1,239.