Pistol-packing valet who saved woman during stabbing fired, then re-hired 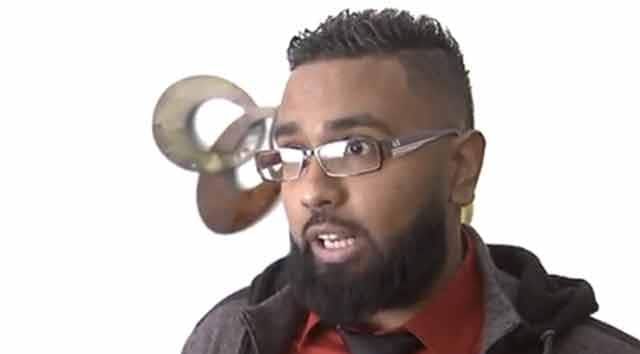 Didarul Sarder said he’s no hero, it was just a natural reaction to do what he could for the woman who was crying for help. (Photo: Fox)

A valet supervisor who works at the General Motors Technical Center in Warren, Michigan, saved a woman who was being stabbed Wednesday after he pulled a gun on her attacker. And although the man was fired on the spot for violating a no-guns policy, it turns out he will get to keep his job after all.

Didarul Sarder told a local Fox affiliate after the incident that he was just coming in to work when he heard the victim screaming for help.

He said what happened next was just a natural reaction.

“I only had like half a second to think and I unholstered my firearm and pointed it at her to drop the knife,” said Sarder, who held the suspect at gunpoint until police arrived.

Authorities later confirmed the 32-year-old suspect was, in fact, the victim’s daughter, and she had come to the facility looking for her mother, who is a GM employee.

The two apparently argued in the lobby before going outside, but once outside, the suspect pulled out a knife and began stabbing her mother repeatedly in the neck, back and abdomen.

The victim was rushed to the hospital, where she was last listed in critical condition, but officials indicate had it not been for Sarder’s actions, the woman, who still has a long road to recovery, might not have made it.

“Maybe those few seconds before the police arrived could be the difference between life and death,” Sarder said, adding he hopes the woman survives.

But while many are calling Sarder a hero for his quick-thinking, selfless actions, he says he was fired on the spot for violating the company’s no-guns policy.

“He said, ‘You shouldn’t have had a firearm here. After this is done he needs to be escorted off the property. He’s not welcome back here,’” Sarder, who has a valid concealed pistol license, recalled of the GM employee who let him go.

Sarder has worked at the facility since December and is contracted through another company, but he says he was never informed of a no-guns policy. Sarder added he was “really bummed out” over losing his job, even a bit emotional, but also said he has no regrets and would have done it all over again.

“If I could save this woman’s life over a job,” he said, “I can get another job.”

But as it turned out, Sarder wasn’t fired after all, Fox News reported.

A GM official said that while they cannot comment on the ongoing investigation, “we can say GM has not requested the valet be dismissed.”

“Had it not been for his quick action and quick thinking, pulling out his concealed weapon,” the mayor noted, “she might have been murdered on site.”