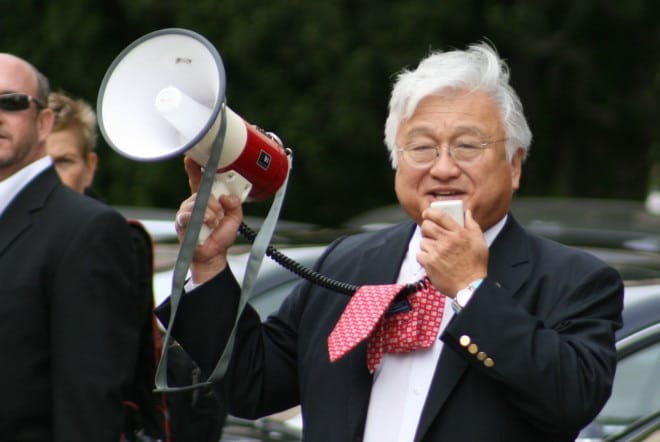 California Congressman Mike Honda wants to fund the CDC to study shootings as an “epidemic” and allow healthcare workers to quiz their patients on guns. (Photo: honda.house.gov)

A party line vote by GOP lawmakers blocked a fourth effort Thursday to bring a bill favored by gun control groups to fund federal research by the Centers for Disease Control to the floor.

The measure, introduced in November, has 74 sponsors – all Democrats – including 22 from New York and California alone, but has languished in the House Subcommittee on Health since its debut. The bill came just days after 110 House Dems sent a letter urging the chamber’s leaders to end a longstanding ban through the Dickey Amendments on federal funding for gun research study as a health care issue.

“Some of the smartest problem-solvers in our nation work for our government, doing critical research,” said the bill’s sponsor, U.S. Rep. Mike Honda (D-Calif.), in a statement. “Many are investigating health issues at the CDC. Our nation faces a tremendous challenge in gun violence, but these brilliant Americans are not allowed to help that effort.”

Honda, who has in the past offered up dead-on-arrival legislation to restrict body armor sales to civilians, allow doctors to quiz their patients on guns, and increase restrictions on homemade firearms, blamed the National Rifle Association for Thursday’s vote.

“We are running into a fight we absolutely must win, with one hand tied behind our back,” said the Silicon Valley lawmaker. “Not one American would have their right to bear arms taken away if this law passed, yet not one Republican disobeyed their NRA masters to support this logical step.”

Honda’s legislation, HR 3926, would strike protections in the Public Health Service Act barring federal funds for some types of studies on gun violence, which the bill describes as being an “epidemic.”

Further, the proposal includes a paragraph that uses the Affordable Care Act to codify a health care worker’s ability to ask patients questions about ownership, possession, use, or storage of a firearm or ammunition in the home as well as counsel them on gun safety. This could shortcut federal court decisions in cases such as Florida’s Docs vs. Glocks case where states have sought to tell physicians that gun questions were, in most cases, outside the scope of health care.

The NRA feels the government should not pursue gun research as a health care issue funded through the CDC.

“Americans should be able to trust an organization that claims its goal is an unbiased approach to public health,” wrote Chris Cox, head of the NRA’s Institute for Legislative Action in an editorial last December. “That’s why the gun control agenda they promoted in the 1990s was so offensive, and that’s why the NRA is firmly against allowing the same agency to pursue the same agenda now.”

Gun control lobby groups, including the Law Center to Prevent Gun Violence and the Brady Campaign, back Honda’s efforts and were dismayed at this week’s continued rejection in Congress.

“If this were any other issue – food poisoning, seat belts, anything else – this would be a non-issue, which speaks to the corporate gun lobby’s stranglehold on Washington,” said Brady President Dan Gross. “Congressman Honda is listening to the voices of Americans who have had enough.”