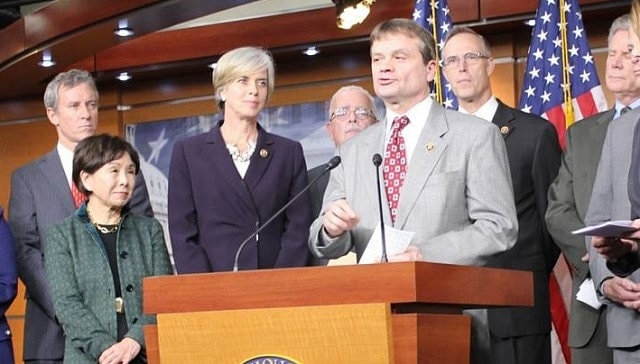 A bipartisan federal measure that would lead to criminal charges for any prohibited person who attempts to purchase a firearm picked up the support of the National Fraternal Order of Police Friday.

“On behalf of more than 330,000 members of the Fraternal Order of Police, I thank you for your continued leadership and support of law enforcement,” said Chuck Canterbury, president of the NFOP in a letter of support to the measure’s sponsor. “I look forward to working with you and your staff to get this bill through Congress and give State and local authorities additional tools to combat gun crime.”

The measure — H. R. 4320 — was initially introduced amid a slew of other gun bills at the beginning of the year by Illinois Democrat Mike Quigley, with three co-sponsors: Republicans Peter King of New York and Patrick Meehan of Pennsylvania, and Democrat Bill Pascrell of New Jersey.

And on Feb. 10, New York Democrat Nita Lowey signed on to the measure, which would require the National Instant Criminal Background Check System to report to state and local law enforcement agencies any instance where a “prohibited person” attempts to purchase a firearm, in order to allow them to pursue criminal charges.

Additionally, if passed the law would require the Federal Department of Justice to report to Congress on the number of prohibited persons who’ve had charges brought against them for attempting to purchase firearms, as well as the number of prosecutions secured.

Quigley issued a release Friday saying he was honored to have the support of the NFOP.

“It demonstrates the desire our state and local law enforcement officers have for additional resources that will help them thwart gun violence across the country. While no one grand solution exists to end all gun violence, we know that a combination of small but practical policy solutions can severely reduce it,” said Quigley in the release.

The measure also has the support of Everytown for Gun Safety,  Americans for Responsible Solutions and the Major Cities Chiefs Police Association, according to the release.

According to NICS, federal prohibitions that may result in a denial include:

Quigley’s office said at the time of the bill’s introduction the legislation was introduced to help address the “epidemic of gun violence” facing the nation.

“For many of the residents in my hometown of Chicago, gun violence is not just a headline – gun violence is an everyday reality. While no one grand solution exists to end all gun violence, we know that a combination of small but practical policy solutions can severely reduce it,” Quigley said.

Additionally, the measure has the support of The Chicago Sun-Times editorial board, who has suggested that since the National Rifle Association has yet to voice an opinion, the could possible be ok with it.

No action has been taken to date on the measure, which is assigned to the House Judiciary Committee’s subcommittee on Crime, Terrorism, Homeland Security and Investigations.