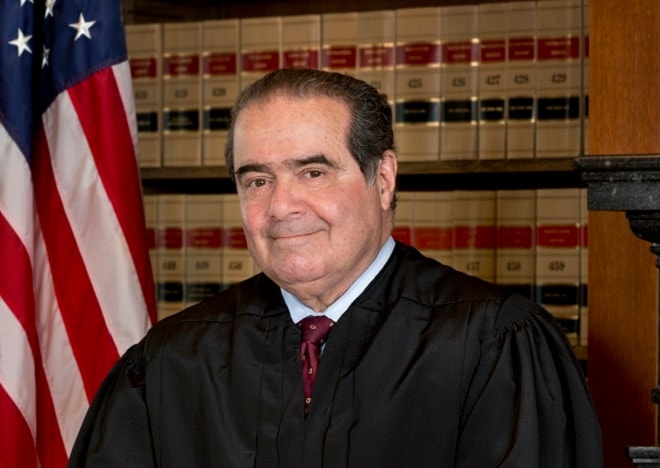 Justice Antonin Scalia, whose public service dated back to the Nixon and Ford era, is dead at age 79. (Photo: SCOTUS)

U.S. Supreme Court Justice Antonin Scalia, the conservative icon of the high court, passed away overnight while staying at a Texas ranch as part of a quail hunting trip.

New Jersey-born Scalia was a graduate of Georgetown University and Harvard Law before rising to the post of United States Assistant Attorney General under the administration of President Gerald Ford.

This led to a bench at the D.C. Circuit Court in a 1982 appointment by President Ronald Reagan and, since 1986, a spot on the Supreme Court as a replacement for retiring Chief Justice Warren Burger with a 98-0 vote from the Senate for his confirmation.

In the past 30 years of service in the nation’s highest court, Scalia penned numerous opinions in which he argued against federalism, racial entitlement and the constitutional right to abortion and in favor of the death penalty and states’ rights.

Where his voice carried the most weight in recent years was in his gun rights cases, the most notable of which was his opinion for the majority in the 2008 case of District of Columbia v. Heller, which detailed an individual right to own a firearm under the Second Amendment.

“As the author of the Heller opinion that confirmed the Second Amendment does indeed protect a fundamental individual right, Justice Scalia was a champion for the right to keep and bear arms,” Chuck Michel, the West Coast counsel for the National Rifle Association and the voice behind numerous important Second Amendment court victories, told Guns.com on Saturday.

With the passing of the conservative stalwart into history, the stage is set for a likely contentions nomination to fill his vacant seat in the court by the White House. However, any nomination would need the grudging acceptance of a Republican-dominated Senate facing an upcoming election cycle.

Michel warned rocky waters could be ahead for the courts.

“In his absence, those statist politicians who abhor the Second Amendment will step up their efforts on multiple fronts to distort his writings and to dilute the legal protections against government infringement that Justice Scalia championed through his brilliant jurisprudence,” said Michel.

The White House stated late Saturday that, “The President and First Lady extend their deepest condolences to Justice Scalia’s family.”