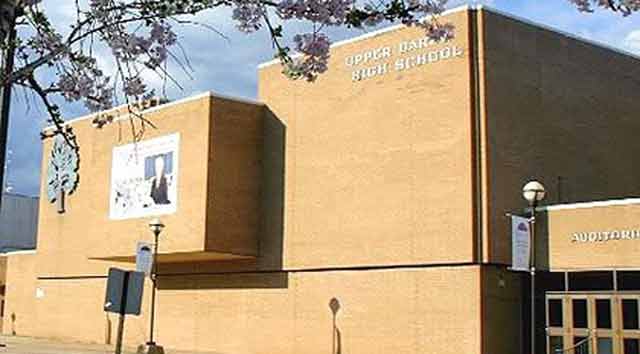 Each day, just under 4,000 students come out of Upper Darby High School, and while most days are uneventful, Friday wasn’t one of those days. (Photo: CBS)

Two officers responding to a call about an after school fight Friday in Upper Darby Township, just outside of Philadelphia, were saved by an armed citizen who witnessed the officers being attacked by a mob of angry teens.

“There were 40 kids. If it wasn’t for the good Samaritan stepping forward, he’d have been dead meat,” Upper Darby Police Superintendent Michael Chitwood said, according to reports from Philly.com. “There’s no doubt they would have attacked him.”

Chitwood said they don’t typically have problems with the students, but Friday was an unusually violent day with officers responding to calls about three different fights near the school, leaving eight teens, 13 to 17 years old, facing charges.

An officer, who has not been named, responded to one of the fights, which had drawn a large crowd of students. In an attempt to diffuse the situation, the officer pulled the two fighting teens apart. But as the officer is holding one teen back, his adversary attacks the officer. The officer continues to try holding the teens apart, while defending himself and calling for backup. Another officer arrived on the scene, but he too was attacked, as the crowd of 40 to 50 students closed in toward the officers.

It was then that a 35-year-old homeowner, who lives on the block where the fight was taking place, noticed the officers in need, grabbed his gun and came to their aid.

“He had the gun in his hand, but he didn’t point it at the kids, he just told them to back off,” Chitwood said.

At that point, the crowd began to disperse, but not before two teens were arrested and slapped with numerous charges, including aggravated assault on police, riot and harassment.

Chitwood said the officers suffered severe injuries and it is unclear when they will return to work.

“If this guy didn’t come out and come to the aid of the officer, this officer would have had significant problems,” Chitwood added.

Chitwood also emphasized that occurrences like these aren’t the norm.

“There’s thousands of kids that walk to and from that school without a problem,” he said, “but every once in a while you get these wannabe gangsters, and if they want to be gangsters, we’ll treat them like gangsters.”

Chitwood said since Friday’s incident, they have doubled after-school patrols in the area, which normally consist of six to eight officers.

“Our goal is to make sure these kids get home safe,” Chitwood said. “I can’t emphasize it enough, but the majority of these kids are decent kids.”