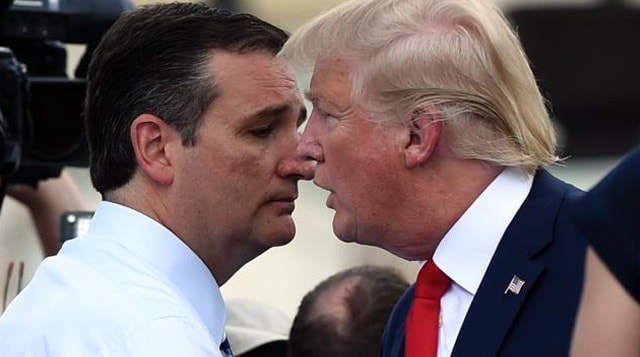 Sen. Ted Cruz, left, and Donald Trump square off in their race to be a presidential candidate. (Photo: AP)

The statement followed Cruz’s comments on Trump’s past campaign donations to Democratic candidates during an interview with Fox & Friends on Monday.

In response to his comments on guns and other issues, Trump said he’s “very seriously” considering filing a lawsuit against Cruz for his “lies.”

Since 1989, Trump has spent around $1.4 million on national-level campaigns for both parties. However, roughly two-thirds of the monies have gone to Republicans and since 2011 he’s donated almost exclusively to conservative campaigns, according to sources (here and here).

As for his views on guns, Trump has crossed the political lines over the past 16 years. For his current presidential campaign, the first issue he addressed in writing were pro-gun measures. He adopted many of the talking points shared by the National Rifle Association, a group that has invited him to speak at a number of annual events.

However, in 2000 he expressed less than ideal views on guns. He said in his book “The America We Deserve” that he supported an assault weapon ban and a 72-hour waiting period before buying a gun.

Cruz’s reference, “one Justice away from losing the Second Amendment,” was likely to the Supreme Court’s 5-4 decision on D.C. vs Heller in which the late Justice Antonin Scalia drafted the favorable opinion. The landmark case determined that the Second Amendment protected an individual’s right to own a firearm for self-defense.

Presidential hopefuls are currently stumping in South Carolina with the vote for a Republican candidate scheduled for Feb. 20. According to local media, Trump is currently ahead in the polls with 35 percent and Cruz is tied for second with Sen. Marco Rubio at 18 percent.