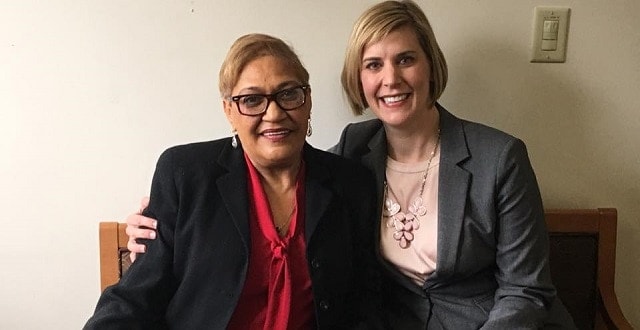 Oregon State Rep. Jennifer Williamson, right, with Rev. Sharon Risher, a relative of victims of the Charleston shooting, who was in Oregon to testify about Williamson’s bill. (Photo: Facebook)

Legislation that would close a “loophole” in criminal background checks for gun purchases has passed an Oregon House committee — albeit with changes.

House Bill 4147 sought to halt any transfer of firearms prior to the return of a completed background check, effectively closing what has come to be known to some as the “Charleston Loophole.”

Federal law requires the National Instant Criminal Background Check System to return a background check application within three days of receiving it, before allowing — but not requiring — the federally licensed firearms dealer to continue with the sale at their own discretion.

Because of the three-day requirement, suspected shooter Dylann Roof was able to buy the gun he used to kill nine individuals at a church in Charleston, South Carolina, last June. Supporters of the law change point out that a prior drug charge on Roof’s record would have prevented the sale of the firearm, had it been caught within the three-day period.

The legislation was passed by the House Judiciary Committee along party lines after being amended by House Majority Leader Jennifer Williamson, a Portland Democrat and bill sponsor, to require the background check be completed within 10 days of being filed before allowing the dealer to continue with the transaction at their own discretion.

“We looked for an approach that would improve the integrity of the background check system while also taking into account feedback from all stakeholders. I believe a 10-business-day limit will prevent many, many gun transfers to dangerous people who are not eligible to buy a firearm,” Williamson said of her change.

Oregon State Police data indicates that only about 3.2 percent of the state’s background checks were subject to a delay, while most checks were processed in minutes, The Oregonian reported.

The vote to amend the legislation followed testimony by the daughter of a Charleston shooting victim, Rev. Sharon Risher, who testified to the pain of loss she felt the current law had caused her.

“That pain was compounded by the shock when I learned that because of a flaw in our background check system a dangerous man was able to buy a gun and shoot nine beautiful people with it,” Risher told the newspaper.

However, groups such as the National Rifle Association have argued for keeping the delay to three days for a few reasons, including that identities can be confused or records may be incomplete, as well as being a preservation of the principle of due process — that the government cannot arbitrarily deprive a person of their rights. Additionally, the three-day rule helps keep the FBI running the system efficiently, the NRA says.

According to the Federal Bureau of Investigation, there are several reasons that a delay may occur in the processing of a NICS application, which include having been punished in any court of a crime punishable by more than one year in prison, being dishonorably discharged from the armed forces, being a user or addict of any controlled substances, being subject to a restraining order, or having been convicted in any court of a misdemeanor domestic violence charge.