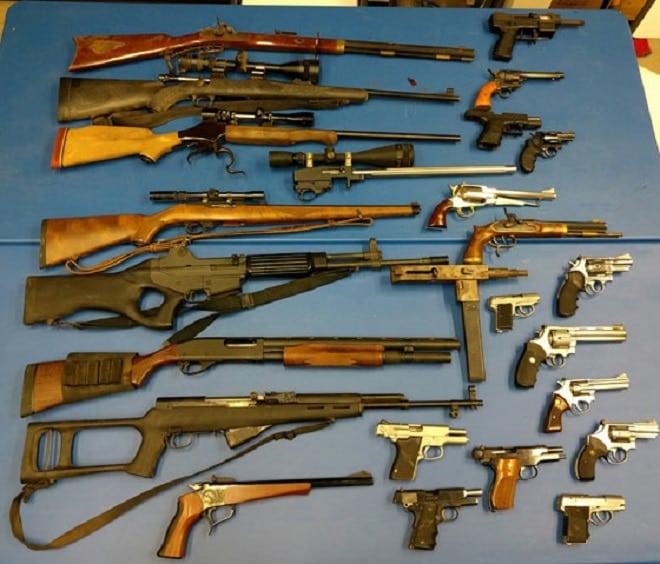 A two-day operation by California law enforcement officials ended with the arrest of 10 individuals and the seizure of a number of registered firearms.

Acting on information in the state Department of Justice’s Armed Prohibited Persons System, DOJ agents and Santa Barbara County Sheriffs deputies moved last week to pick up firearms from those deemed illegally in possession of them.

The controversial APPS system, first established in 2007, uses lists of firearms owners cross-referenced with criminal and mental health records to identify once-legal gun owners who have custody of weapons in violation of state law.

The latest dragnet, as noted in a statement from Attorney General Kamala D. Harris, recovered 83 firearms, 6,326 rounds of ammunition and 52 magazines.

“Removing firearms from dangerous and violent individuals makes our communities safer,” said Harris, currently running for a U.S. Senate seat. “I thank our Department of Justice Bureau of Firearms Special Agents and the Santa Barbara Sheriff’s Department for taking on this dangerous work and their steadfast commitment to keeping our streets safe.”

Despite the stockpile listed, the release from Harris’s office which touted three weapons designated by the state to be “assault weapons” the only image showed about 25 firearms including at least two that were primitive black-powder weapons, some apparently incomplete weapons, as well as a number of single-shot and single-action firearms.

No details were released of those arrested or the charges in their cases, though the DOJ has had issues with making cases stick on APPS arrests in years past.

Starting their first sweeps by armed agents to confiscate these guns nine years ago, the unit has had several high profile missteps.

Following that incident, a Bakersfield man expressed disbelief when armed agents came to his door to seize 18 guns when he flagged in the APPS system. The reason for the raid came from a 40-year-old charge for marijuana possession that is no longer listed in the state’s criminal code. After holding his guns for two weeks, agents returned them once the mistake was realized.

Finally, last November a federal firearms license holder had his 541 gun inventory impounded after he went through mental health treatment last summer, which, unknown to him, landed him in the APPS database. His attorney maintains the guns are legally owned and is fighting the action.

These incidents bolster the argument from gun rights groups in the state who claim the DOJ’s database is overly flawed despite recent efforts to legislate its correction, and that legal gun owners are caught up in its outdated dragnet.

However, despite a $24 million influx by state lawmakers in 2013, Harris asked Sacramento for more cash two weeks ago, citing the unit and its efforts are just treading water. Although financed by a mandatory $19 dealer’s record of sale fee attached to every gun transfer that pumps an estimated $2 million surplus into state coffers in the form of an unauthorized tax, federal courts have upheld the legality of the mandate in recent months.

As of February 11, 2016, the number of subjects on the APPS list still under investigation is 12,334, which the Attorney General holds up as the lowest it’s been since August 2008.