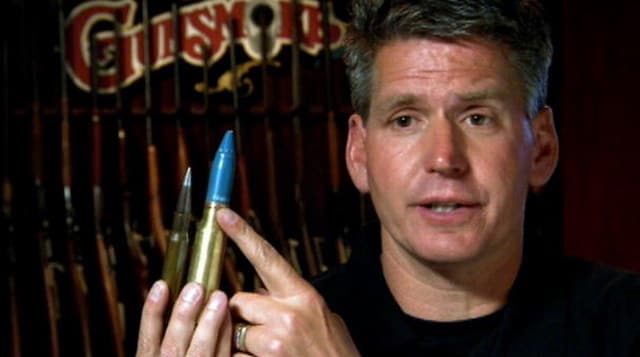 Richard Wyatt starred in the show American Guns alongside his wife and daughter. (Photo: Discovery Channel)

After posting a $25,000 bond, Wyatt, whose store Gunsmoke Guns was the backdrop for Discovery Channel’s short lived American Guns, was ordered to live at a halfway house while out on release, according to an order from the judge overseeing the case.

Wyatt surrendered to authorities last week in connection to 13 counts of gun, tax and conspiracy charges. According to the indictment, Wyatt sold guns at his store illegally and failed to report $1.1 million of income.

According to court documents, Wyatt had to surrender his federal firearms license in 2012 but continued to advertise and operate his store anyway. Authorities further allege Wyatt conspired with others by conducting business with a straw FFL in order to falsify federal background check forms and complete a gun sale.

The investigation was first made public in April 2015 when agents with the Bureau of Alcohol, Tobacco, Firearms and Explosives, and the Internal Revenue Service executed a search warrant at Wyatt’s store in Wheat Ridge, Colorado.

Just a couple weeks after the search, local authorities arrested Wyatt for stealing from an “at risk adult.” Authorities said the victim had consigned a rare and antique gun collection with Gunsmoke in 2013, but Wyatt failed to return the items.

For the 13 counts of criminal charges, Wyatt faces up to 62 years in prison and more than $1.5 million in fines.