Intruder shot in the face while climbing through doggy door 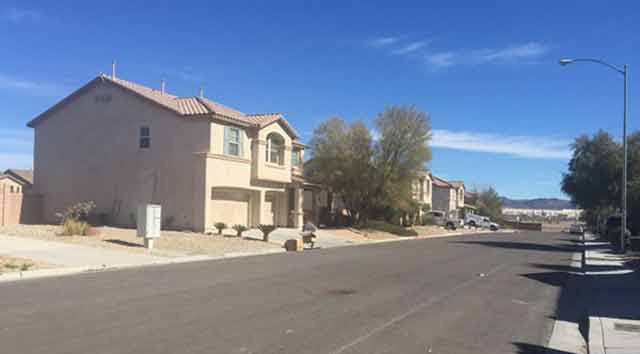 Neighbors said the suspect tried to break into several houses on the block before he was shot. (Photo: NBC)

A man who attempted to break into several homes in a Las Vegas neighborhood Friday night was stopped by an armed homeowner who shot the man as he tried to squeeze through a doggy door.

Nicole Slokken told a local NBC affiliate she received a phone call from her neighbor just after midnight warning her that the suspect was trying to get into her house.

“She said, ‘Are you ok? Are you ok? Someone is trying to kick down your door.’ I said, ‘Oh my gosh!'” Slokken recalled.

Slokken said the suspect, who was armed with a 12-inch knife, repeatedly kicked her door, trying to break it down, but was unsuccessful and moved on to her neighbor’s house instead.

The suspect then tried to break into Slokken’s neighbor’s home, but the homeowner, who has not been named, warned the suspect that he was armed with a .45. Nonetheless, the suspect ignored the warnings and tried to gain access into the home through doggy door. The homeowner, in turn, fired two shots, striking the suspect in the face and shoulder.

After police arrived on the scene, the suspect was transported to a local hospital where he was treated for a shattered jaw and shoulder wound. He was then released into police custody.

The suspect’s phone was recovered from Slokken’s yard, and officials later confirmed the suspect is actually a resident who lives on the same block. There was no indication whether drugs or alcohol may have played a role in the attempted break-ins.

Authorities said they found no wrongdoing on the homeowner’s part and he is not likely to face charges for shooting the intruder.

Slokken, who was home alone with her children that night, called the homeowner’s actions brave.

“I’m glad he did it. It made me feel better – that he’s armed,” she said, adding that a detective told her it’s quite possible the armed homeowner saved their lives.