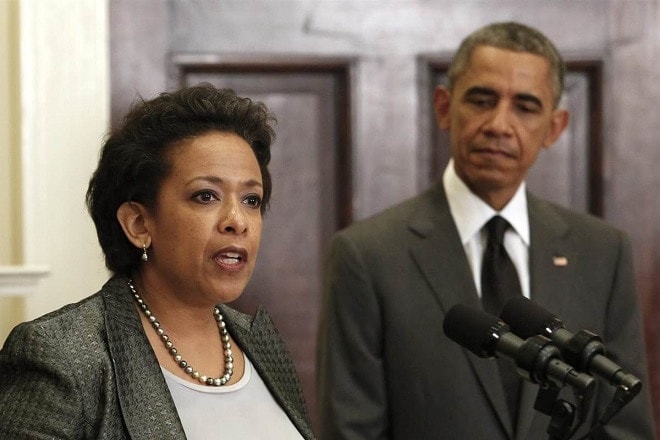 Though only at her current job nine months, U.S. Attorney Gen. Loretta Lynch is considered by some to be a front-runner for President Obama’s next nomination to the Supreme Court. (Photo: AP)

The names being uttered by court watchers for filling the vacant seat on the U.S. Supreme Court following the death of Justice Antonin Scalia range from the mild to the extreme.

“I plan to fulfill my constitutional responsibilities to nominate a successor in due time,” Obama said Saturday just after the news of Scalia’s death broke. “These are responsibilities that I take seriously, as should everyone. They’re bigger than any one party — they’re about a democracy.”

As such, the President is expected to announce his pick on Feb. 22 when the Senate returns from recess.

The nod for a nomination by the White House could likely come from the U.S. Court of Appeals for the D.C. Circuit, which has produced a number of Supreme Court Justices in recent years including Scalia himself, Chief Justice John Roberts and current Justices Clarence Thomas and Ruth Bader Ginsburg.

Top candidates from that court repeatedly mentioned are appellate Judges Sri Srinivasan, who was confirmed by the Senate unanimously in 2013 and if selected and confirmed would be both the court’s first Indian-American justice and first Hindu, as well as his colleague Patricia Millett, another Obama appointment to the bench.

Other diverse candidates from elsewhere in the federal courts are Adalberto Jordan, a Cuban-American from the 11th Circuit, and Jacqueline Nguyen, an appellate judge of the Ninth Circuit who heard two important Second Amendment cases in California last week.

Then there is the current head of the Obama Justice Department, Loretta Lynch, who faced the combined opposition of gun rights groups and Senate Republicans in a lengthy confirmation for her current job.  Tom Goldstein, in his column for Scotusblog.com, this week called Lynch in his mind the leading contender.

Lynch was called, “Eric Holder 2.0,” by opponents in her push through the Senate, while Holder himself, currently in private practice and stumping for Democratic Presidential candidate Hillary Clinton on her efforts to win over voters in the south, is another potentially polarizing name mentioned to fill Scalia’s shoes, though he is a long shot at gaining confirmation and has publicly said he would turn it down if offered.

Klobuchar, F-rated by the NRA, was a lead supporter of ATF Director Todd B. Jones’ nomination in the chamber as well as a sponsor of legislation in the Senate seeking to prohibit convicted stalkers from purchasing firearms. Harris, seeking to replace long-time gun control champion U.S. Sen. Barbara Boxer (D), has long been the nemesis of pro-gun groups on the West Coast.

Nevertheless, with the GOP vowing to block any nomination by the White House until after the election — by filibuster if necessary — any candidate named by Mr. Obama may be an exercise in futility.

Justice Scalia’s body is set to lie in repose in the Supreme Court’s Great Hall on Friday while his funeral will be Saturday at the National Shrine of the Immaculate Conception.