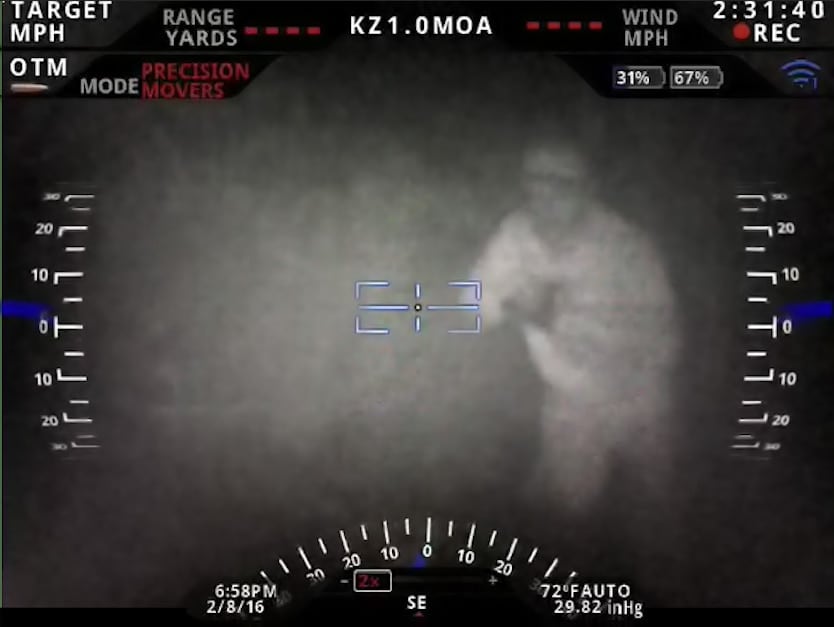 TrackingPoint, maker of new-generation, high-tech guns and optic systems, is now taking orders for a more affordable, laser-guided, night vision-enabled system for home defense. The night vision feature is also being sold separately as an upgrade to existing precision-guided firearms.

In the past, TrackingPoint focused on long-range precision rifles. With the new NightHawk, chambered in .300 Blackout, the company is expanding its line to appeal to home and property owners who want the defensive edge offered by night vision. The system is also advertised for hunting uses, where legal of course.

The NightHawk is built an AR-style platform in black finish. The package comes with accessories including batteries and a charger, cleaning rod, bipod with an adapter, and eye guard. The laser system locks onto a target 300 yards or less away while the trigger is being pressed. The target must be traveling at a fairly slow rate of 7-miles per hour or less.

The night vision/laser-guided .300 BK rifle package isn’t cheap at $6,995 for the first 100 units. Those inclined to buy may regret waiting when the price increases to the normal $15,490.

A 30-day warranty, nearly unprecedented in the industry, is offered with purchase of the Nighthawk. They’ll even accept the gun back if it’s had up to 100 rounds run through it, assuming it and all accessories are returned in like-new condition.

Those who already own TrackingPoint-outfitted rifles may want to upgrade using the night vision kit employed on the NightHawk. It consists of a software upgrade carried on a USB device and a rail-mounted infrared illuminator in a bell-housing case. Its capabilities are described as being similar to second-generation night vision. The kit alone is $2,495 and also carries the 30-day guarantee.

Texas-based TrackingPoint, with its laser-guided bullet system that’s been paired with a few rifle platforms now, as well as their rifle-to-sunglasses app that purportedly allows the user to see around corners, represents the tip of the spear in the trend to bring new and/or formerly military-only technology to the firearms industry. The slightly down-sized, down-priced offering of the Nighthawk is surely an effort to pick up sales in a wider market after the company’s four-month hiatus and restructuring.

There are other companies striving to bring high-tech upgrades to the shooting experience. SilencerCo, out of its Texas facility, has a relatively new electro-optics division, working on adding heads-up displays to its line.

UK-manufacturing and Fort Worth-dwelling NiteSite has more straightforward add-ons of night vision devices to rifle scopes as well as a spotlight-style night vision device. Numerous optic makers now offer rifle scopes with on-board computers that compute variables of load, distance, and atmospheric conditions that snipers and hunters once did with pencil and paper.