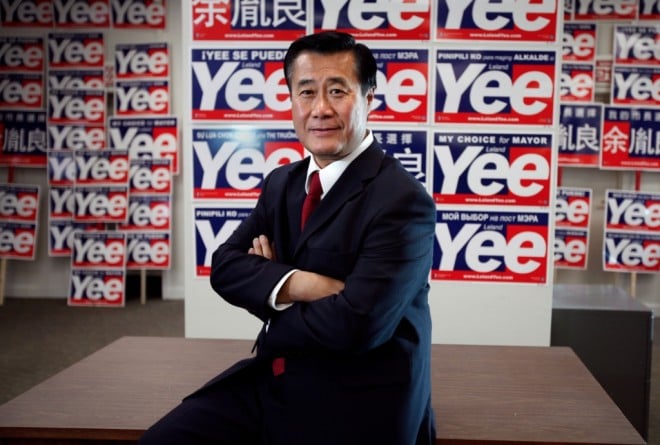 “A slap on the wrist sentence would convey to all public officials in California that the federal Court does not regard flagrant public corruption as particularly serious,” argued prosecutors this week. (Photo: Sarah Rice/The Chronicle)

Known as being “tough on guns,” disgraced former California State Sen. Leland Yee may get 8 years in federal prison for his 2015 plea to racketeering charges.

Yee, ironically known for his gun control legislation, was arrested in 2014 on a host of charges including plotting to smuggle guns into the country via Islamic terror groups. This left many gun control advocates, who up until that time held the San Francisco-based politician as a champion in the crusade for tougher gun laws, dismayed.

Facing potentially the rest of his life in prison, Yee’s legal team entered a plea of guilty to one felony count of racketeering last July as part of a plea agreement.

“Yee demonstrated he was a public servant who was willing to betray the trust of those who elected him by being prepared to sell his vote to the highest bidder,” wrote Stretch. “The investigation revealed that Yee concocted two schemes in which he was prepared to exchange his vote on pending legislation for campaign donations.”

Caught in an expansive federal investigation spanning over four years, Yee allegedly took over $40,000 in donations, many in cash, from undercover agents during the course of the investigation. These payoffs were in exchange for certain official acts including making phone calls to state officials to influence contracts. Yee needed money to help fund an attempt at the office of California’s Secretary of State and to help cover past debts incurred during failed San Francisco mayoral bids.

Just before his arrest, Yee facilitated a meeting with an arms dealer contact of his and undercover agents looking to buy up to $2.5 million worth weapons that ranged from small arms to missile launchers.

Stretch went on to detail that what Yee said and did in private, and not for public consumption, reveals a cynical, rather than altruistic, nature of his actions.

“These serious offenses were then compounded by Yee’s willingness to engage in arms trafficking in order to come up with more campaign donations…,” wrote Stretch. “Despite the fact that Yee was at the time publicly supporting gun control legislation and was in the news for being the victim of threats from an individual unhappy with Yee’s stance, in private, Yee told UCE 4599 [and FBI informant] he was ‘agnostic’ about the gun trafficking. ‘People need what they need’, he told UCE 4599.”

These episodes and statements by Yee, along with his offense conduct, demonstrate a venal attitude toward his position as an elected public official and a willingness to abuse his position of trust in any number of ways. They also reveal a disconnect between the face that Yee puts out to the public and his true nature and character. They necessarily cast a shadow over his career as a public servant and legislation he has sponsored.

The bottom line for everyone paying attention will be the length of the prison sentence imposed. A slap on the wrist sentence would convey to all public officials in California that the federal Court does not regard flagrant public corruption as particularly serious. Every person holding elected office and facing the same fundraising challenges as Yee would engage in the obvious calculation: given the huge financial challenges of raising sufficient money for a successful electoral run, the benefit is worth the minimal risk. That cannot possibly be what this Court would want to result from this important case.

Judge Breyer is set to rule on Yee’s formal sentencing on February 26.