Univ of Texas to allow partially loaded guns in class, ban them in dorms 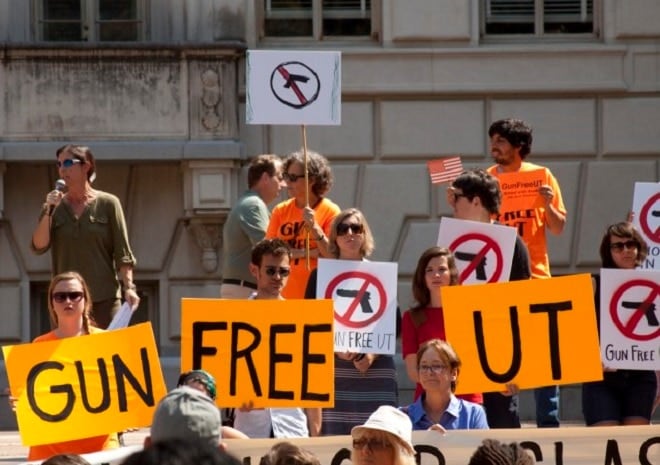 Over the protests of anti-gun groups, UT President Gregory Fenves felt a blanket ban on guns in class would be in violation of the law. (Photo: Gun Free UT)

Following a contentious process and much debate, the president of the University of Texas announced a new policy to comply with concealed carry on campus.

After a series of compromises, a measure to allow licensed concealed handgun permit holders to carry their guns on public college campuses passed the state legislature last year and was signed by Gov. Greg Abbott (R) into law.

As the law allows university presidents to carve out some areas that will remain gun-free zones, UT President Gregory Fenves announced a 19-member working group to recommend both safe firearms storage guidelines and map out enduring gun-free zones for the campus, set to take effect beginning Aug. 1. Considering those recommendations, he debuted the school’s policy this week, notifying UT System Chancellor William McRaven as well as students and faculty of his decisions.

“I do not believe handguns belong on a university campus, so this decision has been the greatest challenge of my presidency to date,” Fenves said in a statement Wednesday. “I empathize with the many faculty members, staffers, students and parents of students who signed petitions, sent emails and letters, and organized to ban guns from campus and especially classrooms. As a professor, I understand the deep concerns raised by so many. However, as president, I have an obligation to uphold the law.”

The 11-page policy report outlines that open carry would be forbidden on campus while concealed carry would be allowed to an extent by license holders who have a permit on their person at all times. Those carrying must have their handgun in a holster that covers the trigger guard and, if a semi-automatic, may have a loaded magazine inserted but cannot have a round in the chamber.

Gun-free zones will endure in many parts of the campus. This includes patient-care areas of medical facilities, where a ticketed sporting event is taking place, animal-research facilities, laboratories, administrator and faculty offices at the occupant’s discretion, places where any Pre-K-12 school-sponsored activity is taking place, as well as most residential housing areas with an exception for a resident’s visiting family member.

Where guns would be allowed are common areas of residence halls such as lounges, in some University Apartments, walkways, and publicly accessible areas as well as in most classrooms.

Fenves voiced concerns with allowing guns in class, but in the end, did not adopt a blanket ban saying, “[U]nder the law, I cannot adopt a policy that has the general effect of excluding licensed concealed handguns from campus. … A classroom exclusion would have this effect.”

Gun Free UT, composed of a number of students, faculty, alumni, and parents, last December refused to condone the prospect of guns in classrooms on campus.

“We categorically reject the recommendation that guns should be allowed in classrooms,” wrote the group. “This recommendation is based on the concern that gun carriers attending class would need to store their weapons and the act of storing them could pose a hazard. If gun carriers feel unsafe in storing their weapons, they should leave them at home.”

Some with the group have promised lawsuits if their recommendations were not implemented.

Second Amendment advocates weighed in on the new policy, but voiced concerns over some of the gun-free zones still allowed.

“UT has created a policy I believe is 98 percent in compliance with law,” Open Carry Texas President CJ Grisham told Guns.com Wednesday. “Banning licensed handgun holders from keeping firearms in their own dorm is a terrible idea.”

Grisham worries that by mandating campus residents lock up guns in their vehicles, it provides an easy target of opportunity for someone looking to acquire an illegal firearm.

“All a criminal has to do is surveil student parking and watch who places a handgun in their vehicle before heading to their dorm – provided they obey the unlawful ruling – and then wait until the right time to break into the vehicle and steal the gun. Now, the university has several problems: a vehicle break in and a gun now in the hands of a criminal on a college campus,” Grisham said.

The UT board of regents can amend the new rules by a two-thirds vote, but must do so within 90 days, otherwise they will take effect as written with school officials posting signage and policy as required.