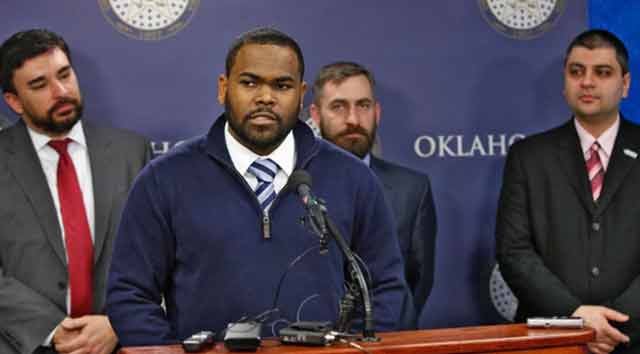 Raja’ee Fatihah, center, claims the owners asked him if he was there to kill them or committ some other act of violence. (Photo: The Oklahoman)

Raja’ee Fatihah, a Muslim member of the U.S. Army Reserve, said he was denied service at the gun range Save Yourself Survival and Tactical Gear in Oktaha, Oklahoma, as a result of his religious affiliation, according to the complaint filed in a Muskogee federal court.

The incident occurred on Oct. 23, 2015, when Fatihah entered the business and asked to use the range. He was required to fill out a liability form, and provide information such as his name and address before being allowed to use the facilities.

However, Fatihah had no trouble until he voiced to the range’s owners, Chad and Nicole Neal, that he was a Muslim, after which “the defendants armed themselves with handguns and refused to allow Fatihah to use the gun range,” ask asked him if he was there as a part of “jihad,” the lawsuit says.

The Neals then told Fatihah he would have to have a “membership application” processed before he would be allowed to use the range, and then made him leave without providing service.

“They really seemed like decent people up until I told them I was Muslim,” Fatihah, 29, said during a news conference hosted by the the groups representing the case, the Council on American-Islamic Relations and the American Civil Liberties Union.

“There is no justification for a business denying people service based on religion. I am a servant of my community in every respect and as a proud American I have enlisted in the U.S. Army Reserve to protect this country. I should be afforded the same rights and privileges as anyone else,” he said. 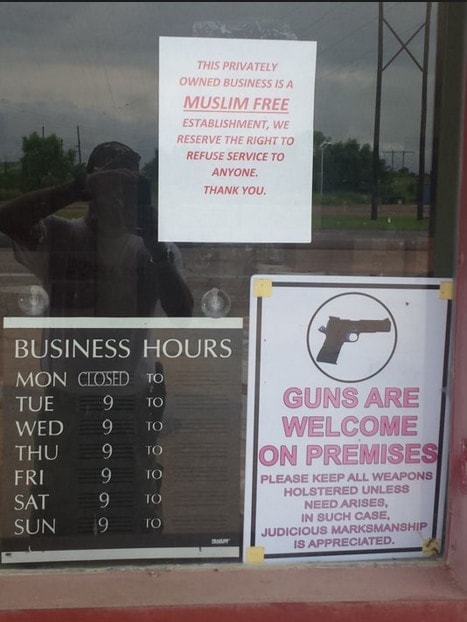 A sign displayed by Save Yourself Survival and Tactical Gear in Oktaha declaring the premises as “Muslim Free.” (Photo: CAIR)

The ACLU, CAIR and Fatihah are requesting that the federal courts order the Neals to comply with the Civil Rights Act of 1964 and Oklahoma’s anti-discrimination laws, and require them to provide equal service to all. Additionally, Fatihah is seeking financial restitution to pay for court and legal fees, as well as damages for “mental and emotional distress” to be determined at trial.

Fatihah said he chose to try to use the range precisely because of the sign and to quash stereotypes of Muslims.

“The whole point of this is to help people to understand that there is nothing to fear about Muslims, to get my story out there and, hopefully, to prevent this from happening to other people, not just Muslims but Americans of all faiths and no-faith traditions,” he said.

However, the gun store owners have their own story, and according to a Facebook post from the American Freedom Law Center — who they indicate is providing legal representation — there are several “undisputed facts” that “raise enough suspicion to kick this guy out of the shop.

These include that Fatihah was an “islamist” and “admittedly a sharia-adherent Muslim,” and was carrying an AK-47 “over his shoulder, magazine inserted.” The range was an outdoor range, and it was “pouring rain” that day and “the Islamist was the only one at the range that day (and there was an indoor range available to him in Tulsa).”

The group argues that while nobody at the range asked Fatihah about his religious affiliation, “he became confrontational with the owners of the shop over his religion and his adherence to sharia.”

According to the AFLC, “The owners seriously feared for their personal safety,” and asked Fatihah to fill out a form and that they would get back with him regarding his ability to fire at the range. Using the paperwork, the Neals said they checked Fatihah’s history and learned he was a board member of CAIR, which they claimed had ties to terror.

“Had others been as vigilant with Army Major Nidal Hasan or the San Bernardino shooters, we may very well have averted those tragedies. The owners of this shop should be congratulated for resisting political correctness and doing what was right under the circumstances,” the AFLC Facebook post concludes.

The AFLC is a public interest litigation firm that “aggressively seeks to advance and defend our Nation’s Judeo-Christian heritage in courts all across our Nation,” according to its website.

Another similar case of Islamic discrimination was dismissed in U.S. District Court in Florida late last year. According to the ruling, the judge dismissed the case on jurisdictional grounds because the suit contested the sign and no individual had been discriminated, which legal experts suggest would have changed the verdict.