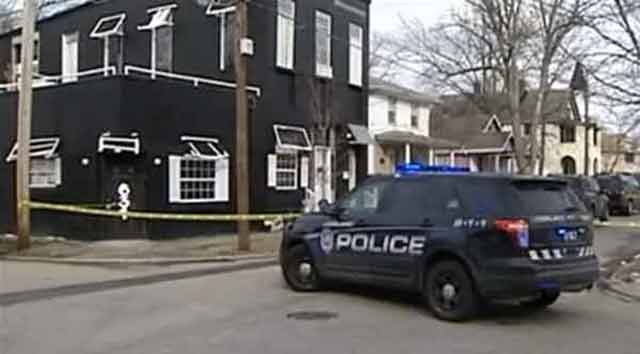 A man was shot and killed after breaking into a man’s home in Lockland, Ohio, Tuesday afternoon.

It was close to 2:15 p.m. when a gold car pulled up near the home and four individuals proceeded to get out, while a fifth person remained in the vehicle. The suspects then forced their way inside the home, but unbeknownst to them, the homeowner, who has not been publicly identified, but sounds to be an older gentleman, was there waiting with a gun.

According to reports from a local NBC affiliate, after entering the home, the suspects – one of whom was armed with a knife – threatened to kill the homeowner, but when the knife-wielding intruder tried to cut the homeowner, he opened fire.

The homeowner then placed a call to 911, while holding the remaining suspects at his home. He told the 911 dispatcher that the guy came into his house and tried to cut his throat before he shot him.

“He’s dying on the floor,” the homeowner could be heard saying in a recording of the call.

The 911 dispatcher pressed the man for further information, but the homeowner seemed reluctant and told the operator that authorities would see what happened when they got there.

The police arrived a short time later, and indeed found the suspect lying on the floor inside the home. He was suffering from a gunshot wound to the chest and was pronounced dead at the scene. His identity has not yet been released.

A gun and a knife were recovered from the inside the home.

The remaining suspects were still inside the home when police arrived, although the fifth suspect – their getaway driver – got away before the police could get there, leaving all of his friends behind. The three suspects were questioned, but it’s unclear if they have been charged.

Police say the homeowner is cooperating fully with the investigation, which is ongoing.