Maine background check initiative will go to the people 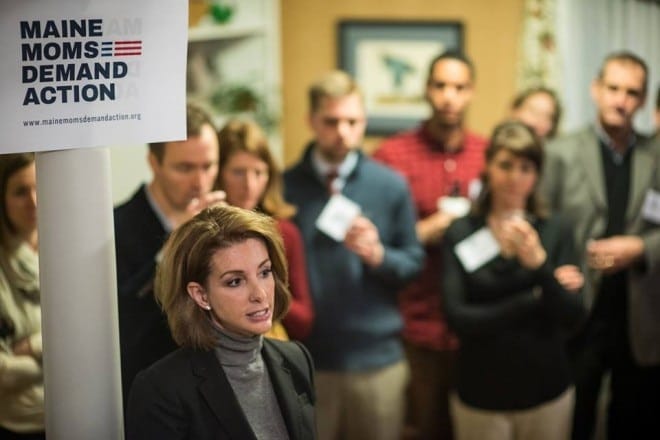 State officials disqualified nearly a quarter of the signatures collected, but gun control groups still had more than enough to certify the effort for the ballot. (Photo: Moms Demand Action)

A ballot referendum to require expanded background checks on most gun transfers will most likely be in the hands of voters to decide this coming November.

Maine Secretary of State Matt Dunlap certified enough valid signatures for the effort on Wednesday, basically ensuring the initiative a spot on the ballot for the general election in less than nine months. Filed with the office last August, the referendum if approved by voters would mandate Brady checks on most gun transfers.

Dunlap’s office gave the go ahead for the group to start collecting signatures in October and a gun control group bankrolled by former New York Mayor Michael Bloomberg coughed over 80,000 signatures last month, though they paid at least $570,000 to a professional canvassing organization to get them. While the state found more than 18,000 signatures were not valid, backers still had enough to meet the minimum of 61,123 registered Maine voters to proceed.

The measure now goes as a bill to the state legislature who can adopt it as written, or decline it – which is the likely scenario for a body of lawmakers who approved constitutional carry by large margins last year. This sets the stage for inclusion on the ballot.

Members of the Bloomberg group were pleased with Dunlap’s certification.

“More than 200 hardworking and dedicated volunteers helped to make this day possible,” said Jackie Sartoris with Moms Demand Action in a statement. “Our coalition continues to grow every day as more and more people join the campaign for common-sense background check reforms that will keep guns out of the hands of dangerous people. Closing the background check loophole will save lives.”

National gun rights groups as well as Gun Owners of Maine and the Sportsman’s Alliance of Maine oppose the expansion.

“Do you think this is about background checks? It isn’t. This is about incrementalism; the step-by-step eroding of our right to keep and bear arms,” reads a statement from Gun Owners of Maine posted on its social media account Wednesday. “We don’t need a billionaire, with his failed New York solutions, to tell Mainers how to fix a ‘problem’ that we simply don’t have.”

Characterization of the background push as coming from outside the state may resonate with those at the polls.

In an effort in 2014 to limit the state’s liberal bear hunting practices, backed largely by out of state money, Maine’s voters remained conservative and handed down a defeat although pro-hunting opponents were only able to muster a modest publicity campaign. A similar measure in 2004 also tanked.

Although a New England state that has voted Democrat in every presidential election since 1992, Maine leans red with a Republican majority in the state Senate, a strong minority in the House, an evenly split congressional delegation and a GOP governor.