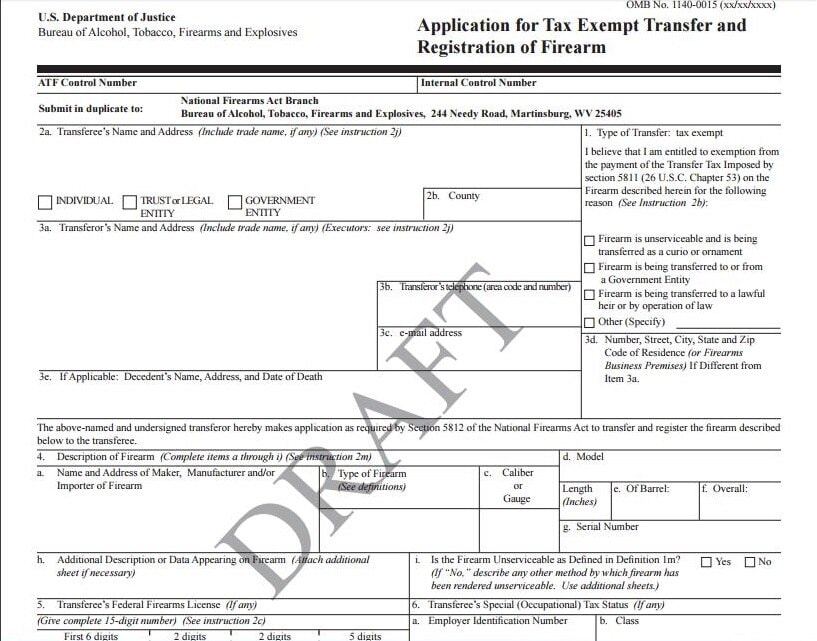 The Bureau of Alcohol, Tobacco, Firearms and Explosives is accepting public comment through mid-April on their newly proposed revisions to a trio of forms.

The forms proposed to be revised include Form 1, an application to make and register a firearm; and forms 4 and 5, the applications for the tax exempt and tax paid transfer and registration of firearms.

Form 1 is required to be filed for permission to make and register a National Firearms Act firearm, such as machine gun, silencer, or a short-barreled rifle. The application’s approval effectively registers the firearm to the applicant, which is required under federal law.

Anyone other than a government agency will have to pay a tax of $200 for the making of a firearm.

The regulatory change to Form 1 is primarily expected to affect businesses or other for-profit entities, as well as individuals and households and the various levels of government.

Form 4 is required for permission to transfer and register NFA firearms, and the application’s approval effectively registers the firearm to the transferee. A tax of $5 or $200 will be incurred by the applicant, with certain exceptions — which can be applied for with forms 3 and 5.

Form 5 is the same as Form 4, except to allow the applicant to file for a tax exemption, and it will primarily affect the various levels of government.

Those wishing to comment on the proposed form changes should contact Gary Schaible, the industry liaison analyst for the Bureau of Alcohol, Tobacco, Firearms and Explosives at 99 New York Ave. N.E., Washington, DC 20226 at nfaombcomments@atf.gov.

The ATF will be accepting public comment on the forms through April 18.