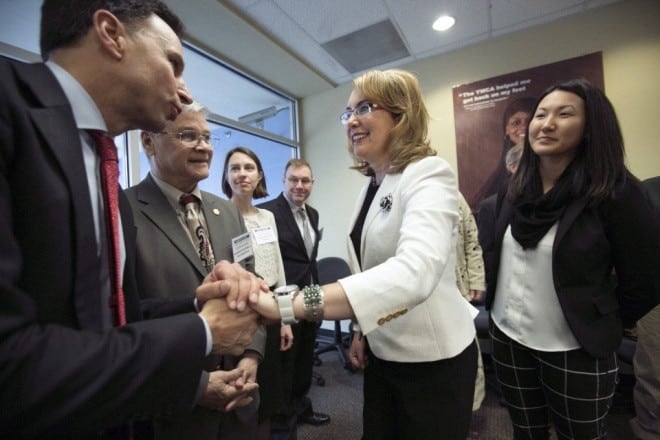 Although the state has relatively few instances of murder committed with firearms and passed a controversial expanded background check law last year, Giffords, known for her national Americans for Responsible Solutions organization, thinks Oregon can do more to keep guns away from those who shouldn’t have them.

“Stopping gun violence takes courage – the courage to do what’s right, and the courage of new ideas. I’ve seen great courage when my life was on the line,” said Giffords in a speech on Friday. “Now is the time to come together – to be responsible! Democrats, Republicans – everyone.”

As noted in a release from the new group, the coalition will encourage legislation for mandatory gun lock laws, back gun violence restraining orders to help take guns away from those deemed at risk, and strengthen the state’s already strict gun background check system.

The same day the coalition was announced in Portland, Democrats in the State House in Salem paused on legislation seeking to expand the waiting period allowed under state law to conduct a background check on gun transfers, citing concerns that the move didn’t have enough steam to make it over the bar. Like other gun control measures this session, it has seen a lack of support even though Democrats enjoy a narrow majority in the legislature.

The faltering proposals came as the state lawmakers’ first attempt to take on gun politics since last fall’s mass shooting at Umpqua Community College – the deadliest in Oregon’s history and as the state is receiving continued national attention over the saga of occupiers of the Malheur National Wildlife Refuge in Burns.

The new Oregon Coalition for Common Sense is not the first state group established by Giffords. Two months ago, the former lawmaker announced a similar organization across the country in New Hampshire with much the same goals.

Like Oregon, that state enjoys a relatively low crime rate and a Democrat governor who is opposed to pro-Second Amendment legislation.