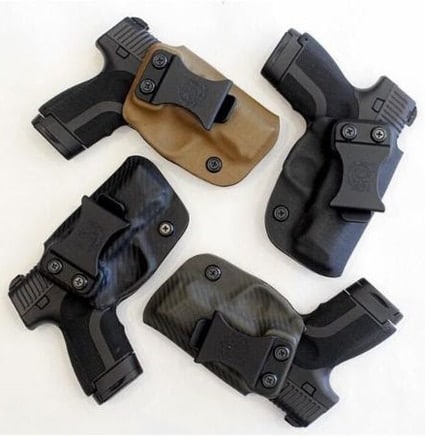 “High speed/low drag” is a slogan often used in the gun industry, but ironically, taking a gun from the drawing board to the shooting range is anything but. Emerging gun company Honor Defense may just change that.

This week, the Georgia company announced new partnerships that will allow consumers to have brand-specific holsters made specifically for the brand’s only products—a trio of concealment pistols, the Honor Guard.

The small team of industry veterans who make up Honor Defense are following a strict path of gun development: make a series of three 9mm subcompact pistols, which can be ordered with modular parts to suit the consumer’s preferences, make it of American parts with American labor, and offer a premium product at a price the working person can afford.

The company is making its flagship handguns to the exclusion of all other products. The narrow focus appears to be paying off in shortening the time between development and shelf availability. In today’s market, even household-name gun companies typically spend a year between prototype approval by government authorities and consumer availability. This may or may not include a period of pre-release marketing in which the firearm and features are made public and, at least from the viewpoint of the potential consumer, excitement builds for the anticipated arrival of the guns on dealers’ shelves. This aspect of the process may be up to four months. Even more time is spent waiting for holster manufacturers to add the new firearm to their product lines.

For a gun company less than three years old, and definitely not a household name, Honor Defense’s lean and laser-like approach may just position them to play alongside big-league manufacturers. A partnership with Gearcraft means that custom-made holsters for the Honor Guard guns will be ready at the same time these firearms are available to consumers. Their consumer-focused approach should deliver convenience and build loyalty from consumers jaded by customary big-company waiting games. Honor Defense guns will be available this spring; holsters are already available to order.

Cost containment is often accomplished by overseas outsourcing. Honor Defense has so far eschewed that practice, opting instead for lean operations within the United States. The new partnerships with American small-businesses indicate their intent to stay that course for custom holster options.

This concealed-carry-ready approach appears to be possible because the Honor Defense/holster company partnerships are with like-minded, similar-size companies. They’ve cut the fat and are focused on what, according to their research, the modern concealed carrier wants. It’s an approach that’s become familiar in other industries, including food and clothing. High speed/low drag usually refers to the performance of elite operators. Honor Defense may be heralding the dawn of that philosophy farther up the industry chain.