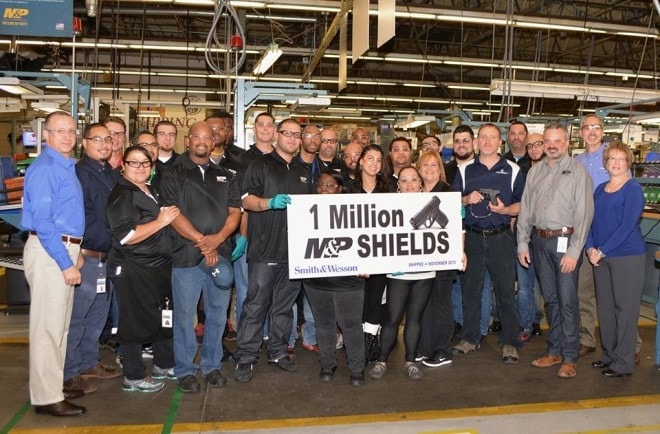 According to figures released this week, Smith & Wesson alone produced over 800,000 pistols in 2014 and last year manufactured and shipped its 1 millionth M&P Shield. (Photo: Smith & Wesson)

Gun production numbers are in from 2014, and, while showing a slight decrease from 2013, are high enough to continue the theme that the Obama administration has been a boon to the domestic firearms industry.

U.S. annual gun production figures, largely constant at 3-4 million from 2000-2008, have risen dramatically in the first six years of the current administration. According to figures from the Bureau of Alcohol, Tobacco, Firearms and Explosives this week there were 9,050,626 guns produced in the U.S in 2014, which is the highest on record this century with the exception of 2013 figures, which peaked at 10.8 million.

The ATF released the latest 92-page Annual Firearms Manufacturers and Export Report this month. These reports, compiled from all licensed gun makers in the country large and small, are delayed a year due to the Trade Secrets Act. Because of this, the latest data report covers 2014.

The top pistol maker was Smith & Wesson with 897,633 made at its Springfield, Massachusetts plant. The top revolver maker was Ruger with 277, 923 wheel guns made in Prescott, Arizona.

Remington was at the top of the list in rifle production with 929,475 guns made at its plants in New York, Kentucky and Minnesota while Big Green also made just under half of the shotguns in the country in 2014, accounting for 413,534 scatterguns of all gauges.

“The numbers speak for themselves,” Lawrence G. Keane, senior vice president, and general counsel of the National Shooting Sports Foundation told Guns.com on Wednesday. “Law-abiding Americans are acquiring firearms for self-protection and to enjoy the shooting sports. Women and an increasingly diverse customer base are evident. It’s a long-term trend that likely has been accelerated by concerns that some politicians would seek to impose arbitrary restrictions on the type of firearms that they would like to lawfully possess.”

One thing is for sure, with the numbers of NICS background checks continuing to remain at high levels and two more years of production records “in the hole,” the most enduring legacy of the current Presidential administration may be that of the great “Armer-in-Chief.”