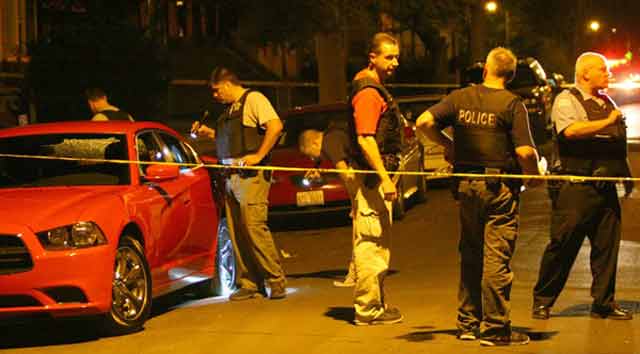 Interim Police Superintendent John Escalante said most of the shootings and homicides in the city are the result of gang activity. (Photo: Chicago Tribune)

Less than two months into the new year, Chicago is already battling a significant increase in homicides. In fact, the homicide rate so far this year is double what it was for the same period in 2015.

According to a report published by the Chicago Tribune Monday, 95 people have already been killed in the city this year, a two-fold increase from 47 last year. Likewise, while this time last year Chicago recorded 193 shootings, that number has also more than doubled to over 420 so far. In January, the city saw 51 homicides, the highest for that month since the year 2000. This past weekend alone, 32 people were shot, four fatally, and Monday added an additional two homicides to the tally.

Some wonder whether the increase is the result of public scrutiny over sometimes questionable police tactics and the idea that officers are becoming less aggressive on the streets as a result, including a decrease in the number of “stop-and-frisks.” However, officials in the Windy City were quick to dismiss those claims, as reported by USA Today.

Interim Police Superintendent John Escalante continued to place most of the blame on gang activity. Escalante also noted what he sees as a disturbing new trend: Street wars waging from exchanges on social media.

Regardless of the reasons behind the increase, the Chicago Police Department is still taking measures to combat the problem, which includes recently moving nearly 400 officers from foot to vehicle patrols in an effort to increase the area officers can see while on patrol. Vehicle patrols also offer faster response times.

Additionally, authorities are cracking down on criminals in the form of raids. Just last week, a single raid left 64 in custody, 40 of which were documented gang members. The raid also resulted in the seizure of more than $200,000 worth of drugs and 19 weapons.