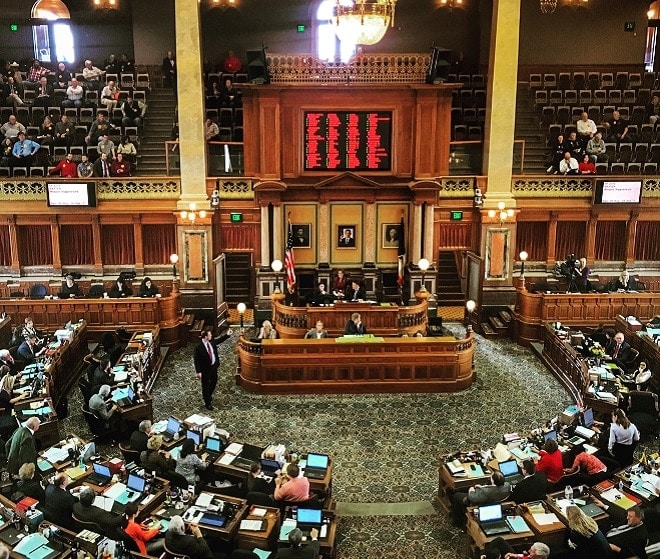 Five pro-gun reform bills made it through the Iowa House with ease on Tuesday, including one to legalize NFA-regulated quiet time. (Photo: Knox Williams/ASA)

It was Second Amendment Day in the Iowa State House as lawmakers passed five pro-gun bills including one that would make the state the 42nd to legalize suppressors.

Withdrawn, the measure became HF 2279 which Rep. Terry Baxter, R-Garner, managed on the floor to an easy 74-24 win.

“I call it the ‘Hearing Protection Bill.’ Suppressors do four important things to protect hearing,” Baxter told Guns.com, outlining the reasons he, as an avid sportsman and hunter, backed the legislation. “First, they eliminate the muzzle blast that damages hearing. Second, they reduce the overall sound by 20-35 percent. Third, they direct much of the remaining sound down range. Finally, they cut the ‘echo factor’ making it easier to pinpoint other shooters in the field. This is why 41 states have legalized suppressors.”

The measure, a simple five-page bill, would repeal the state’s near total ban on National Firearms Act-compliant sound muffling devices. Currently, the Hawkeye State prohibits private citizens from owning an otherwise legal suppressor. The only slim exceptions are for devices “possessed and used by a person solely for the purpose of shooting a deer pursuant to an approved city special deer population control plan,” and for use in law enforcement.

A number of Democrats stood in sometimes-vehement opposition to the bill on the House floor, though with some making rather curious arguments.

“Suppressors have long been associated with snipers and Hollywood shooters– I’ve certainly watched plenty of crime shows so I’ve seen lots of it,” said Rep. Marti Anderson, D-Des Moines. “Have there ever been a mass shooting with a silencer? I don’t know that.”

The move was strongly backed by the National Rifle Association, Iowa Firearms Coalition, and the American Suppressor Association who worked together to help pass the legislation.

“For the third year in a row, the Iowa House of Representatives has done its part to help sportsmen and women in The Hawkeye State protect their hearing while in the field and at the range,” ASA President Knox Williams told Guns.com directly after the vote.

To Williams, it’s time the devices came out of the misunderstood shadows and are recognized as being safety devices.

“Suppressors are the hearing protection of the 21st century sportsmen and thanks to the hard work of Representatives Baxter and Windschitl, an overwhelming and bipartisan majority of the House saw that,” said Williams. “Now, it’s time for the Senate to do its part to help make sure that the next generation of hunters and recreational shooters in Iowa do not have to unnecessarily sacrifice their hearing.”

As part of the IFC’s sponsored Second Amendment Day, four other pro-gun reforms were heard on the House floor and passed with ease.

“Today was one heck of a day for civil rights and gun owners in Iowa,” IFC President Barry Snell noted on the group’s social media account.

Most of these measures made it through the House last year, along with the suppressor bill, in an omnibus reform package that later found rocky waters in the Democrat-heavy Senate.

All five proposals are now headed that way once more, where 26 of 50 seats are controlled by the Dems but with every spot in the upper chamber up for election in November.