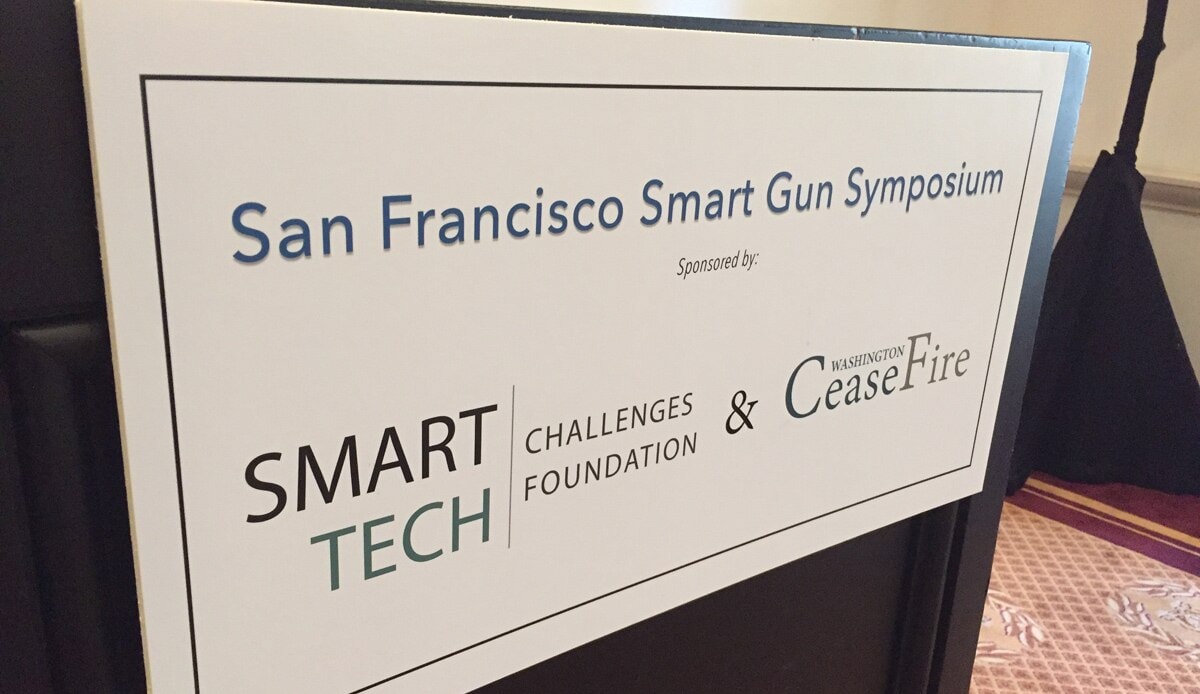 The sign on the podium at the San Francisco Smart Gun Symposium, which discussed advancement of the technology in the U.S. consumer market. (Photo: Daniel Terrill)

Innovators and smart gun advocates discussed the status of the gadgets while identifying potential progress and challenges during the Smart Gun Symposium hosted in San Francisco on Tuesday.

Speakers at the symposium — who include smart gun developers, investors and advocates — said a current demand exists and estimate the technology is one to five years away from maturity, but before any progress can be made in the U.S., politically toxic legislation needs altering.

Washington CeaseFire, a Seattle-based gun control group, hosted the event at landmark The Palace Hotel and brought in speakers from various groups, including law enforcement, gun manufacturers and the Smart Tech Challenges Foundation, a nonprofit with a mission to bring tech solutions to gun violence.

Yet, law enforcement officials in attendance expressed both interest and concern about smart guns. While a variety of the technology has been proven to work and meet industry standards, its reliability has not been tested in a wide range of scenarios that would only occur outside the range. Still, officials could see smart guns in their current state having a more immediate place for users with mission-specific requirements, namely those who routinely engage predictable environments like, for example, a school resource officer.

Supporters said they can see personalized firearms as having a significant impact on reducing gun deaths, mainly accidental and suicides, which often involve a gun that belongs to another person. But smart guns could also greatly disrupt the black market since activating the device requires a key like a fingerprint, handprint or wearable coded device that criminals would either need to obtain as well or circumvent entirely.

Armed with a recent survey showing 59 percent of Americans saying they would buy a smart gun if it were available, speakers say there is a demand for the technology. But before any progress can be made a New Jersey mandate from 2002 needs to be undone.

The legislation sets a deadline to require all guns in the Garden State to include the technology three years after the first one is sold anywhere in the country. While state lawmakers revised the mandate, greatly softening it to requiring that gun stores carry at least one smart gun, the legislation was not signed into law by then Republican presidential candidate Gov. Chris Christie, who pocket vetoed the bill since signing it could be perceived as weak by gun rights supporters.

Despite the lack of support by the governor, New Jersey lawmakers passed an identical measure in February and think Christie will sign it when it reaches his desk a second time now that he’s out of the national spotlight.

Because of the New Jersey mandate, major gun groups like the National Rifle Association and the National Shooting Sports Foundation withhold support for smart guns. While they don’t outright criticize the technology, they instead say they’ll let the market decide, which leaves it to gun control groups and investors mostly from outside the gun industry to advance the tech.