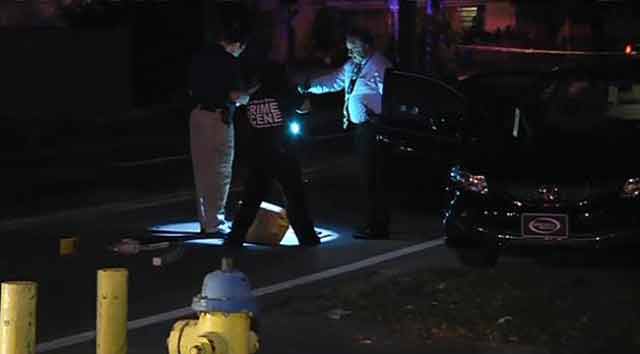 Long-time resident Eduardo Fernandez, whose attention was captured by the flashing lights of more than half a dozen police cars, said the neighborhood used to be quiet, but not anymore. (Photo: WSVN)

A 13-year-old boy is facing charges while recovering from multiple gunshot wounds after he attempted a carjacking in North Miami Beach early Tuesday morning, only to be shot by a passenger in the car.

Just after midnight, Yazmina Mora pulled up to a stop light, with her boyfriend, Paul Clarke sitting in the passenger seat. While waiting for the light to change green, Mora noticed a group of four individuals, when one of them – the 13 year old – approached her Honda Civic from the right side with his hands close to his chest, local media reported.

Mora later told authorities she believed the teen was coming to beg for money, but quickly learned that wasn’t quite the case. Mora realized the boy was armed with a black revolver, and yelled at Clarke, informing him of such.

At that point, Clarke, fearing for his and Mora’s safety, pulled out his own gun and fired two shots through the window, striking the suspect in the abdomen. Mora then drove a short distance, away from the group and to safety, to call 911.

“I am not going to go into justification,” said North Miami Beach Police Detective Cora Mann, “but they were in fear for their life and he wanted to protect himself and his girlfriend,” speaking of Clarke’s actions.

After he was shot, the suspect fell to the ground and the group that was with him, who were said to range in age from about 13 to 20, immediately dispersed, leaving the teen lying on the ground bleeding.

Neither Mora nor Clarke were injured.

When authorities arrived on the scene, the boy was airlifted to a local hospital where he underwent surgery. His condition has since stabilized. Once released from the hospital, he will face charges for attempted carjacking with a firearm.

Although the identity of the teen was not released, Mann confirmed he was known to local authorities through “previous encounters.” The identities of the remaining suspects, who are still at large, however, are unknown.

Mann called the incident “alarming” and questioned why a 13-year-old boy was out after midnight at a time when he should be at home getting ready for school.