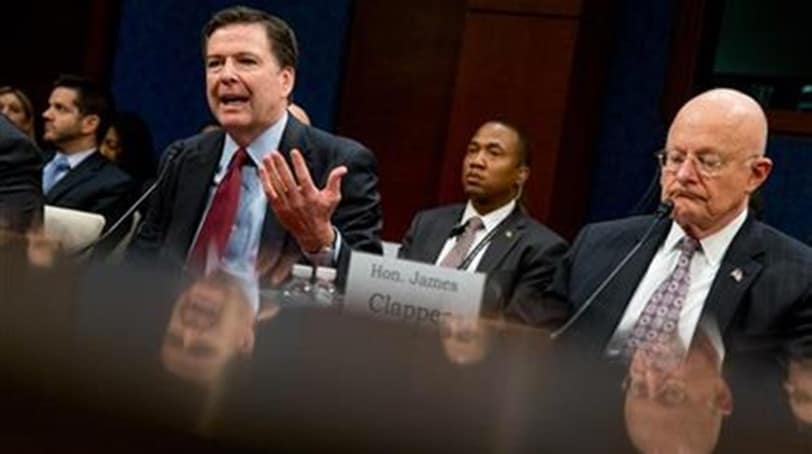 FBI Director James Comey, left, speaks at a House Intelligence Committee hearing, saying Apple had been “very cooperative” in the dispute and that there have been “plenty” of negotiations between the two sides. (Photo: Associated Press)

FBI Director James Comey on Thursday testified to Congress on the need to bypass the encryption of the iPhone belonging to the terrorist who shot and killed 14 people at a government services building in San Bernardino more than two months ago.

iPhone maker Apple has been embroiled in a dispute with the Federal Bureau of Investigation over the agency’s request it disable the password disable feature on the device so software can be used to guess at the password.

Comey said the other feature he is seeking Apple disable keeps sets a time cushion between password attempts, also meant to prevent brute force cracking of their operating system.

The technology giant on Thursday requested a federal judge revoke the order she gave requiring it to comply with the federal agency, the Associated Press reported.

“No court has ever authorized what the government now seeks, no law supports such unlimited and sweeping use of the judicial process, and the Constitution forbids it,” the company said.

Comey said there were costs associated with moving to a world of universal strong encryption, namely that it will hinder law enforcement in carrying out its charge.

Apple CEO Tim Cook last week publicly announced he would resist the order seeking to compel Apple to create a backdoor in the mobile operating system on the iPhone 5c, warning that the software does not exist and creating it could make every iPhone vulnerable to hackers.