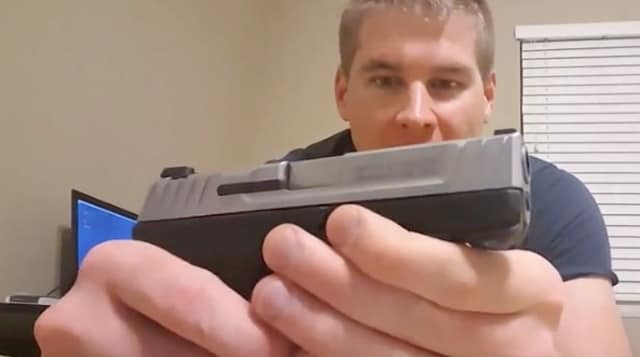 Francis Kenneth in one of his many videos posted on YouTube. His videos contain messages on guns, liberty and fitness. (Photo: YouTube)

For the low price of just $50, Kenneth Francis will get you a gun if you want one but can’t purchase it yourself due to a criminal record. But now Francis’ dealing days are over after he was busted by the Bureau of Alcohol, Tobacco, Firearms and Explosives.

Francis, 28, actually made the ATF’s job somewhat easy by posting a video titled “Need Help Getting A Gun?” to YouTube — which has since been removed — outlining the exact illegal activities in which he would be willing to participate and his contact information. A short time later, the ATF gave it a test.

“I’m getting sick and tired of all this crap that’s going on,” Francis said in the video, which was uploaded in December.

“It’s really starting to piss me off, so if you have a felony or whatever, contact me,” he told his viewers.

Francis offered to get a gun for anyone with a state ID for just $50 and notes that it “is a very reasonable price because I’m basically going to be breaking the law here.” However, he said he’s okay with breaking the law “because the law is corrupt.”

Nonetheless, someone took him up on his offer, an undercover ATF agent, and the law now has Francis indicted for making a false statement to a firearms dealer and for unlawful disposition of a firearm.

According to court documents, he went a Bass Pro Shop in Denver to buy a gun on Jan. 12 and when he filled out ATF Form 4473, he stated that he was the actual buyer of the gun when he wasn’t. He repeated the pattern on Jan. 22 at Sporstman Warehouse in Thorton, Colorado.

Francis pleaded not guilty during his court appearance on Feb. 23 and now he’s out on a $10,000 bond. His trial is set for April 18 in a Colorado federal court.

If convicted, he could face up to 10 years in prison. No word on whether Francis collected enough $50 fees to pay the up to $250,000 fine he’s facing as well.

Daniel Terrill contributed to the reporting of this piece.