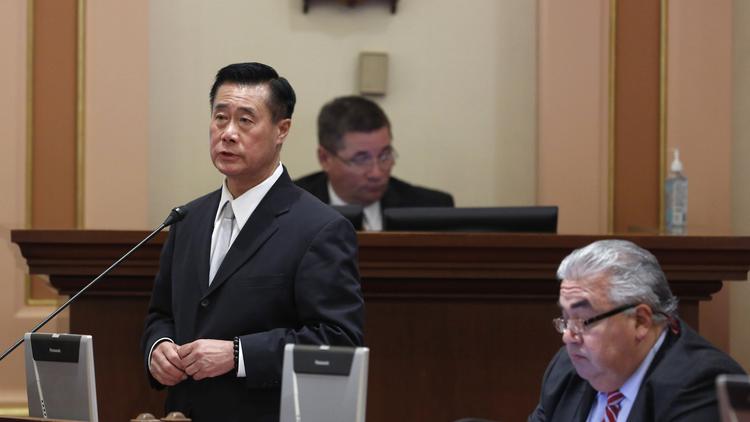 While pushing for microstamping on guns in the state senate, Leland Yee was talking to an undercover FBI agent about smuggling weapons from terror groups in exchange for bribes to pay for his political campaign. (Photo: Rich Pedroncelli /Associated Press)

Yee, ironically known for his gun control legislation, was arrested in 2014 on a host of charges including plotting to smuggle guns into the country via Islamic terror groups. This left many gun control advocates, who up until that time held the San Francisco-based politician as a champion in the crusade for tougher gun laws, dismayed.

Facing potentially the rest of his life in prison, Yee’s legal team entered a plea of guilty to one felony count of racketeering last July as part of a negotiated plea agreement.

“The crimes you committed have resulted in essentially an attack on democratic institutions,” Breyer reportedly told Lee. “The public has to have trust in the integrity of the institution. Mr. Yee, you abused that trust.”

On the former career politician’s stand on being tough on illegal guns – even being once honored by the Brady Campaign – while in office while at the same time brokering deals to help smuggle military grade weapons, Breyer was more candid.

“The hypocritical position on your part to be for gun control and that automatic weapons would be brought into the United States is frightening and unfathomable. I cannot tell you how disturbing it is,” Breyer said. “You were willing to go entirely contrary to your stated position for money, and that is the most venal and dangerous thing you’ve done.”

In court, Yee showed remorse, telling Breyer, “I have taken full responsibility for my actions. I have accepted and understand the crimes I have committed. Nothing will ever take away the pain I have caused my family, friends, constituents and the institution I represented.”

Following his term, Yee will undergo three years of supervised release in which he will be forbidden to have any contact with the more than 30 other co-defendants in the sweeping investigation. Further, he will have to pay $20,100 in fines and fees by the end of the month and will forfeit $28,466 seized by the government in 2015.

While Stretch’s office did not release a statement, gun rights advocates felt vindicated.

“Maybe the Brady Campaign should do universal background checks on people it decides to honor,” Citizens Committee for the Right to Keep and Bear Arms Chairman Alan Gottlieb said in a statement emailed to Guns.com. “Remember, the Brady bunch, and Michael Bloomberg’s Everytown group thinks gun owners should all be treated like criminals. Well, here’s a guy who pushed the gun control agenda, and he is a criminal.”

While he may be adjudicated a criminal by the federal government, Yee isn’t exactly going to reopen Alcatraz.

The court recommended Yee be placed at the Federal Bureau of Prisons contract facility at Taft, California, which is regarded as a cushy “Club Fed” prison noted for its low-security measures and plush accommodations when contrasted against other institutions.

Taft was listed as one of the “Best Places to go to Prison” in 2012 as part of the program “American Greed” and is best known for housing jailed California musicians and even Tommy Chong, who wrote a book about his experience there in 2004.

Yee is directed to surrender at the U.S Marshal’s Office in San Francisco on March 25 at 2 p.m.