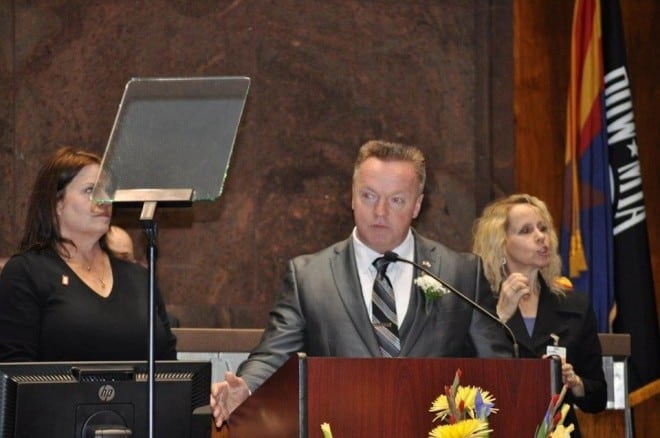 Lawmakers in Arizona exercised 10th Amendment protections Wednesday when they voted to forbid enforcement of any law federal law they deem infringes the right to bear arms.

A bill introduced to the House in January with only three sponsors, all Republicans, carried the chamber as a whole this week in a 33-21 vote largely along party lines.

Kern’s proposal, HB 2300, prohibits state or local governments from using resources to enforce federal laws related to personal firearms. In short, it puts Washington on its own when it comes to gun laws in Arizona. Local officials who violate the statute as adopted would be liable for a $3,000 fine on the first offense. Break the law again and it could mean jail time.

House Democrats argue by adopting a blanket refusal to help enforce federal law, it shortcuts the role of checks and balances.

“The legislature undertakes its actions, and then it’s the judiciary that decides if it’s constitutional or not,” said Rep. Randall Friese, D-Tucson, on the bill’s journey through committee earlier this month.

Nevertheless, this has not stopped at least 27 states such as Missouri, South Carolina and Tennessee from attempting to enact such legislation in recent years, citing state’s rights protection under the 10th Amendment of the U.S. Constitution.

Kern’s bill now heads to the state Senate where that body’s Committee on Federalism, Mandates and Fiscal Responsibility unanimously voted last week to condemn the White House’s latest executive actions on gun control to be unenforceable.