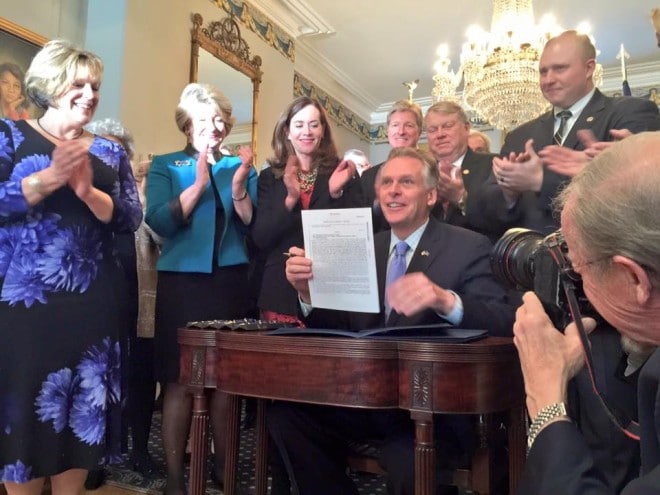 Gov. Terry McAuliffe, a staunch anti-gun Democrat, by twist of fate signed one of the most sweeping concealed carry reforms in the country on Friday at the Executive Mansion. (Photo: governor.virginia.gov)

Virginia Gov. Terry McAuliffe kept up his end of a historic bipartisan agreement that expands concealed carry recognition while taking guns away from domestic abusers.

The deal, announced just over three weeks ago, jettisoned a plan by Attorney General Mark Herring to no longer recognize concealed carry permits from 25 states effective March 1 over fears those licenses did not meet the same guidelines as Virginia.

Instead, Herring’s office will enter into a reciprocity agreement with any state open to it and recognize all valid permits from 48 other states (Vermont does not issue permits) as well as the District of Columbia.

In exchange, the Virginia State Police will send troopers to gun shows to provide voluntary background checks for private gun sales while gun owners with certain protective orders will have to hand over their firearms within 24 hours of being served and be prohibited from possessing firearms for the length of the order.

“The historic bipartisan agreement will make Virginia safer by keeping guns out of the hands of domestic abusers and people who cannot pass background checks,” said McAuliffe in a statement. “Virginians elect their leaders to work together to get things done, and today I am proud to say we did just that. This is the most significant step forward on gun safety in 24 years, and I look forward to continuing to work with the General Assembly and the public safety community to build on the progress we made this session.”

The National Rifle Association, along with state gun rights groups, welcomed the news of HB 1163 and SB 610, the concealed carry expansion, being signed into law but shied away from commenting on the other bills.

“Now, more than six million law-abiding gun owners will be free to travel in and out of Virginia with their Second Amendment rights intact,” said Chris W. Cox, executive director of the NRA’s Institute for Legislative Action in a statement emailed to Guns.com. “Self-defense is a fundamental right that must be respected.”

Cox argued that the measure could be a stepping-stone to nationwide reciprocity, long a goal of the group, saying, “Hopefully this effort will encourage Congress to pass national right to carry reciprocity legislation as soon as possible.”

Gun control groups, while welcoming the bills to strip guns from domestic abusers, vowed to make the best of the legislation that was implemented.

“We obviously were disappointed with the governor because we thought he could have made a much better deal,” said Coalition to Stop Gun Violence Executive Director Josh Horwitz in an email to Guns.com. “But now that the deal is finalized, we intend to take lemons and make lemonade by working with all stakeholders to ensure that the domestic violence law is vigorously implemented and form the basis for future policy change in the Commonwealth.”

The bills are scheduled to become effective between now and July 1.