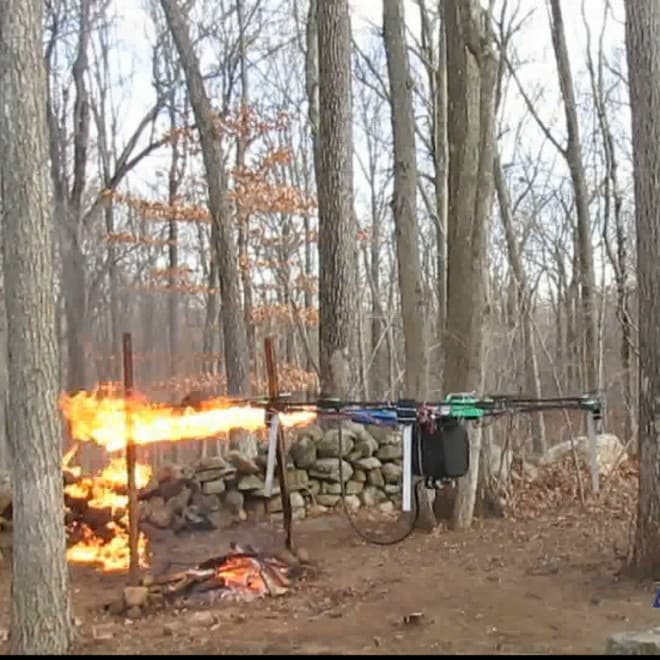 After first arming his quadcopter with a .22LR pistol, then a flame device, a Connecticut teen has sparked a push to ban armed unmanned aircraft in the state. (Photo: Youtube)

After a teen in the state flew his multi-rotor first with a pistol then with a flamethrower, lawmakers are seeking to criminalize future occurrences.

Connecticut teen Austin Haughwout, who in July made headlines with a viral video of a 26-inch remote control quad-copter that had been outfitted to fire a Kel Tec PMR-30 .22LR pistol, brought attention from concerned local politicians and the FAA but, instead of laying low, upped the ante with a personal drone equipped with a flame projector made from an in-line electric fuel pump that he used to roast a holiday turkey.

Now two bills in the state legislature aim to make it a felony for civilians to arm private unmanned aircraft.

“I don’t know what he’s thinking about, but that’s just reckless on its face,” State Rep. William Tong, D-Stamford, co-chairman of the Judiciary Committee, told the Associated Press. “I get and I understand that kids do crazy things, but that also raises a question about how we ought to regulate these machines as they get ever more sophisticated, because they do have the potential to cause damage or infringe on the rights of others.”

The House Public Safety and Security Committee is currently reviewing HB 5274 which would criminalize anyone equipping a personal unmanned aircraft to release tear gas or similar agents, or to remotely control a deadly weapon, incendiary device or explosive. Violators will be subject to a Class C felony, which shares the same sentencing guidelines as second-degree manslaughter in Connecticut, and would allow for up to 10 years in state prison.

A companion measure, SB 148, is currently assigned to the Senate Program Review and Investigations Committee.

Both have exceptions for law enforcement though guidelines such as obtaining warrants for the use of unmanned aerial vehicles or restricting their use to instances where human life is in jeopardy are outlined.

The father of the teen who sparked the controversy argues the legislation is not needed.

“This is a solution looking for a problem that doesn’t exist,” said Bret Haughwout.

If passed, Connecticut would not be the first state to seek criminalizing armed civilian aerial vehicles. Last year both South Carolina and Tennessee pursued such bans.

“I have seen UAVs equipped with very, very powerful machine guns on YouTube,” said Assemblyman Elliot Anderson, a Democrat from Las Vegas who backed that state’s push. “It can be done. It’s one of those things people think about when they think of UAVs, so I wanted to be able to say, ‘This isn’t allowed in our state.’ That’s another way, I think, to make people more comfortable with the technology.”

Public hearings on the Connecticut measures are set for this week.