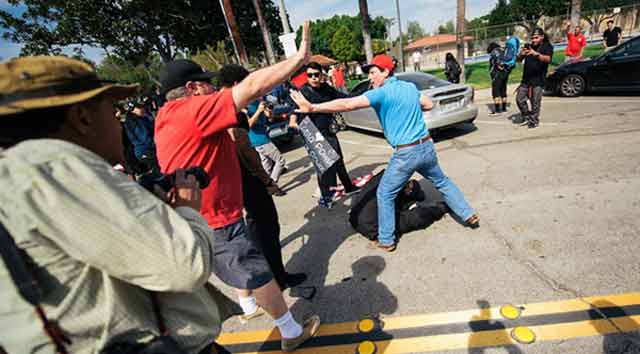 When violence broke out between members of the Ku Klux Klan and counter protesters in Anaheim over the weekend, one Klan member was knocked to the ground and beaten. And while fellow Klansmen essentially abandoned their “brothers,” leaving them to fend for themselves, one man stood between the angry protesters and the fallen Klan member. That man was Brian Levin and, ironically, that man is Jewish.

Levin, who is the director of the Center for the Study of Hate and Extremism at Cal State San Bernardino, was at the rally to witness and record the hate group, as he has done for several years. But when the violence erupted and there was not yet a police presence, Levin did more than witness. He jumped right in the middle without hesitation and urged the fighting to cease.

“The protesters were going to tear these guys limb for limb,” Levin said. “I don’t know how long I could’ve held them back.”

Levin, who said he didn’t protect the man on philosophical grounds, noted that only one other individual tried to stop the angry crowd from making matters worse.

“I’ve seen this before,” Levin said. “You don’t want a hostile crowd with a stationary target on the ground. Once you get a crowd going, it doesn’t stop.”

Levin said he was concerned that someone – or several people – was going to be killed.

Nonetheless, Levin was able to keep the Klan member from further attacks long enough for police to arrive and deescalate the situation. Afterwards, Levin queried the Klansman on how it felt to have his life saved by a Jewish man.

I intervene in attack on LWK Grand Dragon at OC Rally 2/27 No rebroadcast, TV or retransmission other than retweets pic.twitter.com/tBgtOuoEPA

Klan Grand Dragon answers "How do you feel that a Jewish person helped save your life today?" LWK Rally Anahiem, CA pic.twitter.com/qsL9i9BXkB