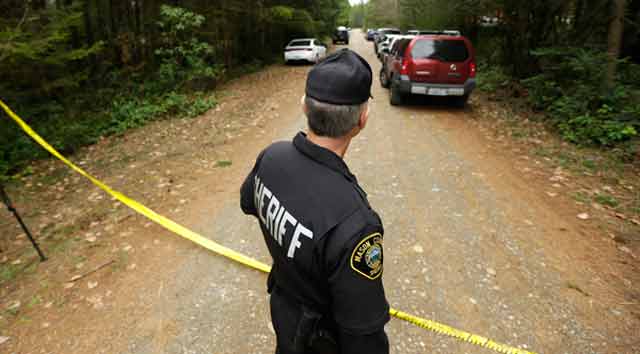 A law enforcement officer stands at a roadblock Friday near the rural property where the shooting occurred. (Photo: Ted Warren / KIRO)

Authorities are investigating an apparent murder-suicide that left five people dead Friday morning  in a rural home in Belfair, Washington.

Police first received a 911 call at 9:37 a.m. from David Wayne Campbell, 51, who said he had just killed his wife and children and was holding a gun to his own head. Campbell had also contacted an officer whom he had previously dealt with, Mason County Chief Deputy Ryan Spurling said.

Law enforcement responded to the calls and went to the home, where a more than three hour standoff with Campbell occurred. During that time, a 12-year-old girl was able to escape from the home. She appeared to be physically unharmed, but was transported to the hospital for an evaluation.

Meanwhile, Campbell, who was still armed, remained inside the home, and after several hours of unsuccessful negotiations, tear gas was deployed inside the home. Campbell then exited the home, but then went back inside again. He came back out a second time and, while standing on the front lawn, put a handgun to his temple and shot himself around 1 p.m. He was pronounced dead on the scene.

In a nearby chicken coop, investigators discovered Campbell’s wife, Lana Carlson, and two boys, 16-year-old Quinn Carlson and 18-year-old Tory Carlson. A fourth victim, who’s name has not yet been released, pending notification of next of kin, was also found. All four suffered gunshot wounds and were pronounced dead on the scene.

Authorities have not confirmed the relationship, but neighbors told local media that Lana and her previous husband, who died of cancer, adopted the two boys from Russia and the young girl from China.

Police do not yet have a motive for the murders, but are saying it is the worse shooting the area has seen for more than 80 years. Mason County Sheriff Casey Salisbury called the incident “a terrible tragedy.”

Neighbors said they heard “lots of shooting” Thursday night, but none on Friday. Target practice was common on the property and neighbors said they thought nothing of the gunshots. Officials did not say when they believed the victims were murdered.

Neighbors and family alike were shocked by the shooting, noting that Lana appeared to be happy and there was no obvious indication that such a tragedy was likely to occur.