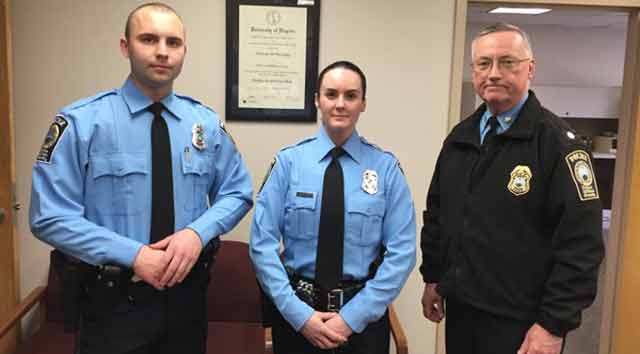 The Prince William County Police Department in Virginia posted a tweet Friday afternoon congratulating two new officers who were sworn in that day and set to work their first shifts this past weekend. Little did the department know that less than 24 hours later, one of those officers would be killed before her first shift ended.

Officers responded to a domestic-related call around 5:30 p.m. in an upper middle class Woodbridge neighborhood, about 20 miles outside of Washington, D.C. Responding officers engaged in a shootout with the suspect, who was later identified as Ronald Hamilton, 32. During the exchange of gunfire, three officers were struck, one fatally. After the officers were shot and backup arrived, Hamilton surrendered to authorities.

Area residents say there were kids playing outside in the neighborhood when the shooting occurred.

“We heard three to four gunshots, so we started running,” said a young witness, who did not want to be identified. “And then when we got up here we saw all the cops. They told us to go inside.”

Once authorities made their way inside the residence, they discovered Hamilton’s wife, Crystal, had been fatally shot as well, likely before police arrived. The couple’s 11-year-old son was also at the home, but was said to be physically unharmed, according to reports from a local NBC affiliate.

The injured officers were identified as David McKeown, Jesse Hempen and Ashley Guindon. Efforts to save Guindon, 28, failed and she died as the result of the injuries she sustained during the shootout. Guindon was on her first shift, one of the officers pictured in the department’s tweet just one day prior. Officers McKeown and Hempen were transported to the hospital and said to have a long road to recovery ahead.

Hamilton is being held without bond and faces charges for the murder of his wife and Guindon, as well as other charges related to the incident. According to Cindy Your, Defense Information Systems Agency spokeswoman out of Fort Meade, Maryland, Hamilton is a staff sergeant with the U.S. Army, currently assigned to the Pentagon’s Joint Staff Support Center. Jesse Hempen (L) and David McKeown (R) are recovering from injuries sustained in the shootout, the extent of which are not known at this time. (Photo: PWCPD)

Neighbors said they were shocked by the shooting and that the couple seemed nice.

Prince William County police Chief Stephan Hudson said it was a sad day for everyone in law enforcement, and more than 100 patrol cars lined the streets Sunday morning as Guindon’s body was transported from the hospital to the medical examiner.

Hudson said the department was “struck by her passion to do this job.”

Guindon, whose father committed suicide the day after returning home from Iraq, served in the U.S. Marine Corps Reserve and comes from a family of law enforcement officers.