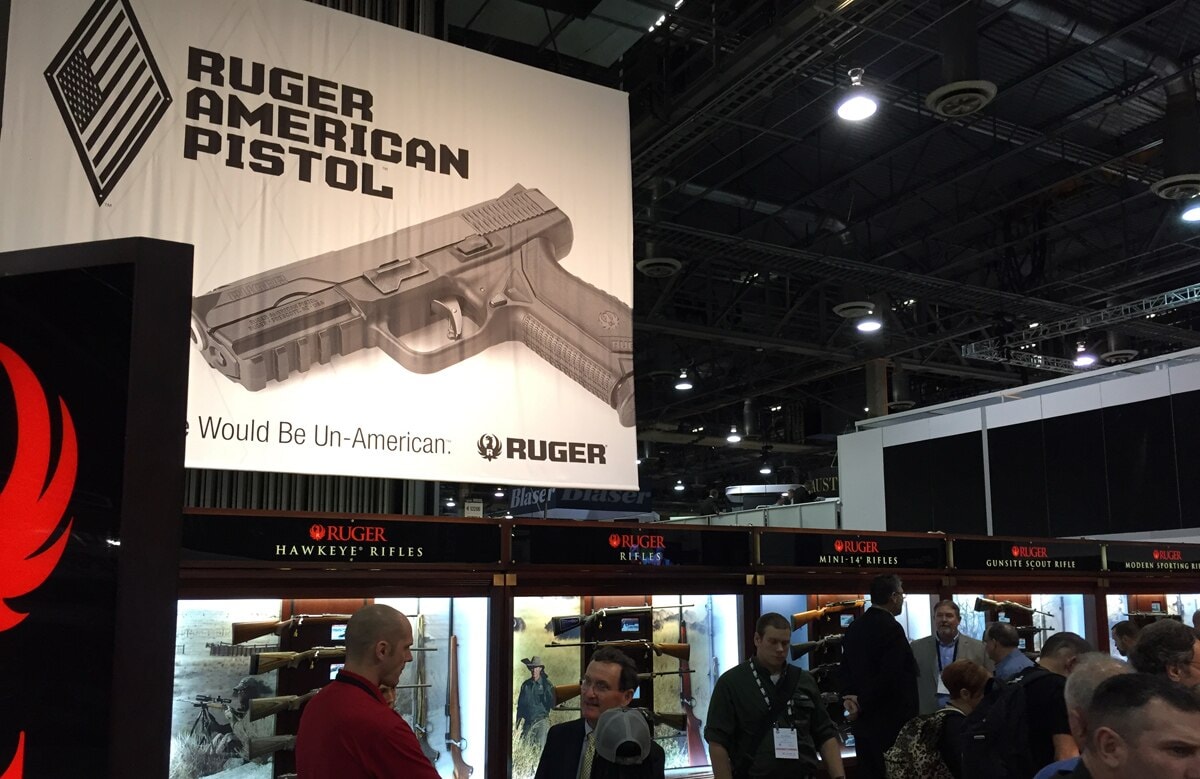 The Ruger booth at 2016’s SHOT Show. If you look closely you can see the company’s CEO Mike Fifer. (Photo: Daniel Terrill)

According to Sturm, Ruger & Company’s fourth quarter filings with the Securities and Exchange Commission, the company raked in $152.4 million, an increase of $29.8 million from the year before, in sales for the quarter and $23 million in annual profit derived from FY2015’s net sales of $551.1 million. Firearm sales made up $545 million and of that, new products represented $115.4 million, or 21 percent.

Yet, queries during last week’s conference call with investors did not dig into minute financial details but rather focused on pace and understanding Ruger’s expansions into other markets. As analysts worry that the gun bubble will eventually burst once President Obama leaves office, gun makers like Ruger are trying to ease the minds of investors by stabilizing the market.

Ruger’s chief executive officer, Mike Fifer, responded to questions regarding the upcoming election, popular new products like the American Pistol, and the company’s breaking into the rapidly growing yet heavily regulated silencer business.

Politics, specifically anti-gun lawmakers and their ideas perpetuated as threats by pro-gun lobbyist groups, has driven gun sales through the entirety of Obama’s two terms. In 2013, for example, fear of stricter federal gun control laws in the wake of the Sandy Hook massacre created a surge in gun sales that for Ruger amounted to $679 million.

Although 2015 generated $134 million less in total sales, it’s nothing to sneeze at. Acting as a barometer for gun sales, background check figures in 2015 had several record-breaking days and months, especially leading up to the new year.

Still, sales have become relatively calm since the gun control focused executive actions Obama issued at the beginning of the year were realized to be less restrictive than expected. Also, with the election year, the industry is having trouble identifying a villain, but Democrats and Hillary Clinton have both been safe bets.

“I think we’ll see a step-up of demand if a Democrat wins the election,” Fifer said. “And particularly so if they win the Senate, because in spite of whether President Obama is successful in appointing a new Supreme Court Justice … the next President will get several opportunities and that could drive concern about the rights of – gun rights.”

The Ruger American line was introduced as an economical brand of traditional firearm designs, cutting costs by using polymer frames rather than wood or metal. The newest rendition, also introduced earlier this year, is the American Pistol that would ideally compete with service pistols made by Glock or Smith & Wesson. Analysts asked about the market reception of the American Pistol, specifically with the availability, a challenge for most gun makers.

“One of the things with the American Pistol is, we had a very innovative launch plan, shipping to retailers and our select ranges across the country in advance of actual announcement to consumers,” said Christopher John Killoy, Ruger’s president and chief operating officer.

Fifer touched on dredging up consumer awareness for the pistol and inventory build in anticipation to demand. “I think it’s more important to have enough when you launch, and that demand is perishable, you really need to service it at launch if you can,” he said.

“There’s a certain number of folks who, when they see [a new gun] on the cover of a magazine, want to run out and buy it right then and there,” Fifer said. “But if you wait six months or nine months, they may have two different reactions: one may be they’ve just forgotten about it and they’re on for the next exciting thing, or two, they are so resentful they couldn’t get it that you can’t even give it to them.”

Since silencer ownership has been rapidly growing for the better part of a decade, larger companies have started entering the business.

“We pay a lot of attention to what’s out there. Frankly, our big focus right now is going to be on suppressors,” Fifer said, referring to the Ruger-branded silencer revealed earlier this year to supplement the company’s popular line of .22-caliber pistols and rifles.

“I think suppressors on emerging markets really has taken the whole shooting industry by storm. Once people finally get around to trying it, they realize how delightful it is to shoot in a much quieter environment. And we just think it’s going to be a big growth area,” he said.

Last summer, lawmakers along with the corporate sponsored American Suppressor Association filed legislation to remove silencers from a strict regulatory law passed in the Prohibition era that requires silencer owners to register the item, file copious amounts of paperwork and pay a $200 tax.

Despite the hurdles, silencer ownership grew by 39 percent from 2014 to 2015, putting more than 800,000 total silencers in circulation. As Fifer explains, larger companies acknowledging the market will encourage more gun dealers to get licensed and carry the items.

“At the SHOT Show, we had a bunch of retailers come up to us and say, ‘Hey, I was thinking about getting into the silencer business, but I couldn’t make up my mind, but now that Ruger’s in it, that means it’s mainstream. I’m going to do it. I’m going to get my license,’” Fifer said and added he thinks Ruger will see results from the endeavor in a year or two.