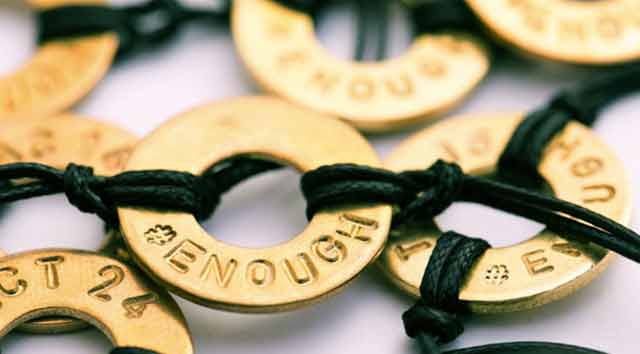 Celebrities in attendance at the Academy Awards Sunday were seen wearing bracelets to show their support to end gun violence.

“On the red carpet, high-profile celebrities … will join the effort to shed light on the human cost of gun violence by wearing unique, hand-crafted bracelets that commemorate Americans killed or injured by gun violence,” the Brady Campaign to Prevent Gun Violence said in a press release.

Celebrities such as Patricia Arquette, Steve Carell, and Bryan Cranston, of the hit series “Breaking Bad,” were seen wearing the simple accessory, whilst no doubt surrounded by droves of armed security.

The handcrafted bracelets, which remind everyone that “behind every bullet is a story,” are part of the Say Enough initiative of the Brady Campaign, which enlists influential people, such as those in Hollywood, to help bring light to gun violence.